Amber Goodwin wonders if being a serious athlete in college somehow made her appear as a not-serious candidate for law school. She’d always wanted to be a lawyer but as an undergrad was rejected ten times for law school.

Her eleventh attempt – at Mitchell Hamline – would be successful but only after 20 years passed. And it might have helped that she got arrested in the interim.

Now, Goodwin will spend her final year of law school as president of the Student Bar Association. She ran on a ticket with Kirsty Hanson, which marks the first time both the SBA president and vice president are part of Mitchell Hamline’s blended-learning enrollment option, in which students study both online and in-person. 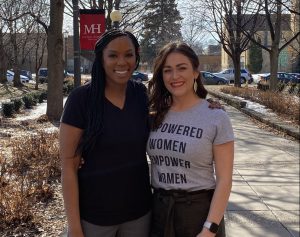 Goodwin will be the first black woman to serve as SBA president at Mitchell Hamline, and both women are pioneers in other ways as well. “I’m the only person in my family who’s ever been an attorney. [Vice President Hanson] is the first person in her family to go to college,” said Goodwin. “We ran on a ticket of breaking down barriers to have more access to people impacted by the legal system.”

“We want to co-govern with the student body to learn together and find ways to support each other,” Goodwin, 40, said in a recent interview. “I think [blended and traditional on-campus students] can learn from each other. People are coming into Mitchell Hamline at all different parts of life.”

The Student Bar Association is the umbrella organization that oversees all student groups on campus, including their funding that comes from student fees. SBA leadership also represent the interests and concerns of these groups in regular meetings with school leadership.

As blended learning students, Goodwin and Hanson live outside the Twin Cities and will do much of this work remotely. But they also plan to be on campus as much as possible, as COVID restrictions allow.

Goodwin’s love for the law started on television while growing up in Midland, Texas, during the 1980s. As a kid, she preferred watching lawyer-themed shows. “Hunter.” “Law and Order.” And yes, “Matlock.”

She gained a further appreciation for the law after college as she worked in politics, union organizing, as a field organizer for Barack Obama’s campaign in 2008, and then as the founder of a nonprofit that focuses on ending gun violence.

“I kept seeing gaps in how the law is applied and wanted to understand that better to make a more informed argument,” Goodwin added. “I wanted to know more about the freedoms I have around speech, and even around getting arrested.”

In 2006, working as a union organizer in Houston, Goodwin was arrested for protesting on behalf of low-wage workers. She later wrote about the arrest, which had been pre-planned, in her application essay to Mitchell Hamline. “It was one of my proudest moments, and I remember the lawyers gave me the confidence to get arrested by assuring me they’d get us out,” she said.  “[Congressman and civil rights icon] John Lewis also spoke to us and said he’d been in much worse, so I was in.” 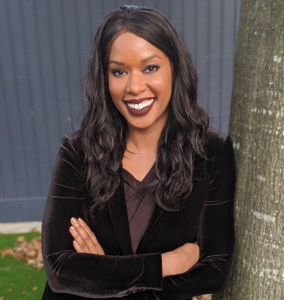 But when she finally arrived at Mitchell Hamline, it was a slog. She recalls raising her hand the first week of school to ask her torts professor to define a tort (something several students later thanked her for).

“I’ve never cried as much as I have in law school,” Goodwin said. “I didn’t feel like I knew what I was doing.” As SBA president, Goodwin wants to remember those feelings to make other students that also don’t fit the mold of a traditional law student feel included.

Hanson lives in Moorhead, Minnesota, with her family, including her toddler daughter. She was a social worker before attending Mitchell Hamline and plans to remain in the field after graduation.

On their campaign website, Hanson summarized the focus Goodwin and she will have in their new posts – to “find new ways to support traditional and non-traditional students through the law school experience.” The two held an online coffee chat and study break this week.

Goodwin, who still lives in Houston, plans to focus on dispute resolution work after graduation. That’s thanks, in part, to a weekend workshop that brought together survivors of the 2007 I-35W bridge collapse in Minneapolis and the attorneys who worked ensuing cases. The experience, she said, opened her eyes to the importance of attorneys understanding trauma while helping people during their worst moments.

The night she was sworn in as president, Goodwin tweeted the moment had been a lifelong dream. After all those rejections as an undergrad and coming back to law school as a second career, she noted: “It’s literally never too late.”