When COVID-19 forced food-and-drink businesses in Minnesota to close in March, Chris Montana ’13 (HUSL) did what many fellow distillery owners across the country did: He took the ethanol he’d normally use for distillation and instead made (and donated) hand sanitizer. Montana’s Du Nord Craft Spirits in south Minneapolis is the first black-owned distillery in the nation.

A few months later, Du Nord was severely damaged in the unrest following the killing of George Floyd by Minneapolis police. Montana and his wife, Shanelle, responded by converting their fire-damaged warehouse to a food bank to help feed people in the community whose nearby grocery stores also had burned. The Montanas then started a recovery fund to help other black- and brown-owned businesses that were damaged. 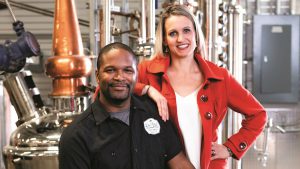 Local and national media have been documenting Montana’s efforts and seeking him out as a voice on community renewal. Gov. Tim Walz has spoken about Montana several times in news conferences in the aftermath of the Floyd killing, noting the “impressive” perspective he heard. “[Montana] said the thought of rebuilding in a new environment with the changes that are coming is even more exciting” than the excitement he had when he first opened, the governor said.

Back in March, the Star Tribune featured Montana’s hand sanitizer efforts, noting that one of the recipients was a church where he had been fed as a child.

The hand sanitizer effort grew so much, Montana moved operations to a larger facility in St. Paul. That would prove lucky, as Montana later told the Star Tribune in a separate story, because gallons of ethanol were not in the Minneapolis facility the morning of May 29th. That’s when his warehouse was looted and set on fire, though the structure was saved by the sprinkler system.

As the unrest continued in the wake of the killing by police of George Floyd, Montana focused on the community around his distillery and gained national attention, including from HuffPost and distillery news websites. He told the Star Tribune that the damage to his business hurts, but “the story here is the protest.”

In addition to creating the food bank in their damaged warehouse, the couple also started the Du Nord Riot Recovery Fund to help other black and brown-owned businesses that were damaged and burned during the protests. It raised more than a half-million dollars in its first two weeks.

Montana graduated from Hamline University School of Law in 2013, the same year Du Nord opened—“a scrappy distillery born of rural practicality and city vibe,” as the company’s website notes—a reference to Chris and his wife, Shanelle, growing up in Minneapolis and Cold Spring, Minnesota, respectively.

At some point, he’ll return to focusing on the actual distillery business that had closed for COVID before it was heavily damaged. He told the Star-Tribune that fellow distillery owners across the country already have offered to help him rebuild his operations.

“We’re going to be OK,” he told the paper. “Du Nord is the first black-owned distillery in America. We need to keep this thing. We need to build it. And it needs to be something that sticks around that I can hand off to my kids.”