Anthony S. Niedwiecki, a longtime legal educator and activist on behalf of LGBTQ rights, began serving as president and dean at Mitchell Hamline School of Law on July 1. 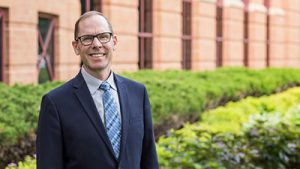 “I’m thrilled to be joining Mitchell Hamline,” Niedwiecki said. “This school is one of the leading innovators in legal education, and I admire its focus on real-world preparation, commitment to students, and connection to community. I look forward to helping us continue to be a force for justice.”

“We are so excited to have Anthony on board,” said Frank Harris, chair of Mitchell Hamline’s board of trustees. “He is a thoughtful and inclusive leader whose breadth of experience in clinical education, distance learning, skills instruction, and other areas critical to our mission will serve him well in this role.”

Niedwiecki (pronounced ned WICK ee) has said one of his first priorities will be to expand the school’s staffing and programming around diversity, equity, and inclusion.

“Students from all backgrounds should feel welcomed and supported at Mitchell Hamline,” he said. “Our job is to meet students where they are and equip them with a legal education so they can make the changes they desire in their own lives, their communities, and society as a whole.”

Niedwiecki is the first openly gay president and dean at Mitchell Hamline or any of its predecessor schools, and one of few openly LGBTQ law school deans in the country. A native of Livonia, Michigan, he returns to the Midwest with his husband and partner of 18 years, Waymon Hudson.

Niedwiecki has spent 25 years working in the law. He started as an associate at two firms in Texas before moving into legal education in 1998. He has held law school faculty and administrative positions at Temple University, Arizona State University, Nova Southeastern University, and John Marshall.

For the last two decades, Niedwiecki has advocated for social and racial justice as an academic, elected official, and community activist. In 2007, he founded Fight OUT Loud, an organization dedicated to helping people counter discrimination and hate directed at the LGBTQ community, and he has received numerous awards for his advocacy on LGBTQ issues. He has served as city commissioner and vice mayor of Oakland Park, Fla., as well as a member of the Broward County, Fla., Resource Recovery and Human Rights boards.

More on his history of advocacy for equality