Frank Harris ’75 will chair board of trustees 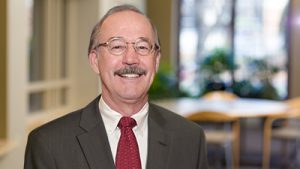 Frank Harris ’75, new chair of the Mitchell Hamline board of trustees.

Joining the 33-member board, which oversees operations for the law school, are:

Frances L. Kern ’13 had been serving as alumni board representative. That role now goes to Beeby, but Kern remains on the board. Amber Goodwin will serve as student representative to the board.

Harris is moving from vice chair to chair, and he will be taking over leadership of the board from Lisa A. Gray ’86, who is rotating off the board. Nicole James Gilchrist ’03 will serve as vice chair; Steven Kirsch ’76 will continue as secretary; and Gregory L. Buck ’87 becomes treasurer.

In addition to Gray, the following trustees have completed their terms as trustees and are stepping down: Judge Jill Flaskamp Halbrooks ’85, James J. Hoolihan ’79, Ellen G. Sampson ’84, and David M. Sparby ’80.

Alumni board: Mitchell Hamline’s Alumni Association board also has a change in membership and leadership starting July 1.

Alex Beeby ’16 takes over as president, with Landon Ascheman ’09 serving as vice president. New members include Jason Johnson ’18, Jackie Perez ’19, Kevin Cassidy ’16, Joe Roach ’94, and Evan Tsai ’07. The Hon. John Rodenberg ’81 has completed his term of service and is rotating off the board.