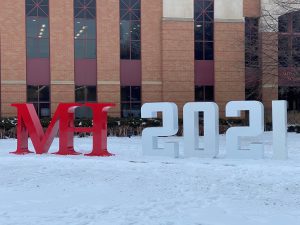 Mitchell Hamline recognized its 91 newest graduates at a Winter Commencement ceremony Sunday afternoon. The ceremony, which also honored 16 students who had graduated last spring, was the second to be held online since the outbreak of the COVID-19 pandemic.

“Mitchell Hamline is a better place because you’re in it,” noted President and Dean Anthony Niedwiecki to graduates. This was Niedwiecki’s first commencement ceremony since taking the helm of the school in July.

The pre-recorded ceremony included a welcome from Niedwiecki, followed by a land acknowledgment from Professor Angelique EagleWoman, co-director of the Native American Law and Sovereignty Institute. The student speaker was Gregory Cunningham ’21. Professor and Vice Dean Jim Hilbert gave the faculty charge.

Alum and trustee Chris Montana ’13 gave the keynote speech. Montana, the owner of the first black-owned distillery in the United States, acknowledged the break from tradition of having an accomplished attorney as speaker to talk about the work of the law. But Montana’s path from Mitchell Hamline to Du Nord Craft Spirits also helps showcase that the school is dedicated to giving a legal education to those who don’t look like the traditional idea of a lawyer, he said. Montana gained prominence this year, first after the pandemic hit and he moved his distillery to producing hand sanitizer, then when his wife and he raised hundreds of thousands of dollars for minority-owned businesses in Minneapolis that were damaged or destroyed in the violence following the killing of George Floyd. 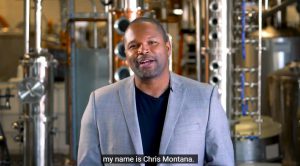 When Mitchell Hamline moved the Spring 2020 commencement online, that ceremony did not include the reading of graduates’ names. As such, all spring graduates were invited to attend a future commencement ceremony where names would be read and 16 of them chose to do so at Sunday’s Winter Commencement.

The school’s newest alums range in age from 22 to 65 – Bob Whitsitt, a well-known former NBA and NFL executive, turned 65 on the day he graduated from law school. “It’s never too late,” he said in an email to the school.

Other graduates included the state of Oklahoma’s Missing and Murdered Indigenous Women coordinator; an aspiring country music singer who already has a record deal; two sisters who got their degrees on the same day; and the president of the Mitchell Hamline Black Law Students Association, who helped form a group last summer to call for more systemic changes to address racial inequities in legal education and the law.

“This class of students had a lot thrown at them during their last sprints to the finish line,” observed Dean Niedwiecki. “But through COVID, the racial reckonings of the last year, and even the threats to democracy in these most recent days, they made it.

“They should be proud and as I told them earlier this week, they should also be ready to help rebuild democracy. We need them more than ever.”