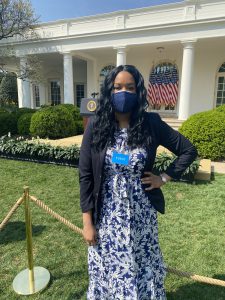 Mitchell Hamline’s Student Bar Association president Amber Goodwin was a guest at the White House Thursday for an event in the Rose Garden where President Joe Biden announced executive action on guns and gun violence.

“Some little girls dream about their wedding day, but this was the day I dreamt about,” Goodwin wrote in a social media post before the event. “I can’t believe this day is here. I won’t ever get over this moment.”

Biden’s actions included ordering his administration to tighten restrictions on guns and weapons that can be made from parts bought online – known as ghost guns because they’re often untraceable. The president also announced changes to programs that will send more federal funds to community violence intervention programs.