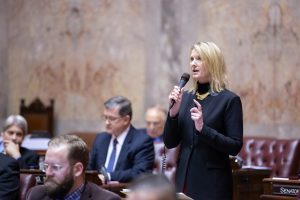 Washington recently became the first state to guarantee low-income tenants access to a lawyer if they’re being evicted, thanks to legislation sponsored by state Sen. Patty Kuderer, a 1986 graduate of William Mitchell College of Law.

Gov. Jay Inslee signed the bill into law on April 22, 2021. It includes several provisions aimed at reducing homelessness, though the right to counsel language has gotten most of the attention because of its historic nature. Until now, only local jurisdictions – including New York City, Philadelphia, and San Francisco – had passed measures to guarantee attorneys for people facing evictions.

“The best way reduce evictions is to prevent them in the first place,” Kuderer said during a recent interview. “Tenants are at an unfair advantage if they go to court against property managers who have teams of lawyers. This balances the scales by having an attorney who specializes in housing law represent the tenant.”

Kuderer notes that until now, only eight percent of tenants in Washington had a lawyer during an eviction proceeding, compared to 92% of landlords. Data also show tenants with legal representation are less likely to be evicted.

“The ultimate goal is saving tenancies, and this is a crucial piece.”

Kuderer, 62, was first appointed to a seat in the Washington House of Representatives in 2015, then won election in 2016. Soon after, she was appointed to the state Senate to fill a vacancy. She went on to win elections in 2017 and 2018. Her district includes several communities to the east of Seattle, including parts of Bellevue, Redmond, and Kirkland. Bill Gates and Jeff Bezos are among her constituents.

Kuderer’s time in elective office is the culmination of a career serving the public. Before moving to Washington in 1999, she was city attorney in Red Wing, Minnesota, and her private practice often included representing municipalities and counties. That work resulted in her arguing several cases in front of the Minnesota Court of Appeals and Minnesota Supreme Court. One of those Supreme Court arguments happened on the then-William Mitchell campus, with several former classmates and faculty in attendance. “That was one of my most fun experiences in my career,” she said.

She grew up one of nine children in Fairmont, Minnesota. Her father, Elton Kuderer ’60, was Martin County Attorney during the 1970s and later elected to the University of Minnesota Board of Regents, where he eventually served as chairman. He was also a William Mitchell Distinguished Alumni Awards winner. Two of Kuderer’s brothers, Gregory ‘81 and Robert ‘90, fellow Mitchell Hamline alumni who practice at Erickson, Zierke, Kuderer & Madsen, P.A. in Minnesota.

In late 2018, the Democratically controlled Washington Senate created a committee to focus on matters related to housing stability and affordability. Kuderer was named chairperson.

Upwards of 200,000 people in Washington are estimated to be behind on their rent, in part because of unemployment caused by the COVID pandemic. The new law, which builds upon changes to evictions law made two years ago, includes requiring more efforts to resolve the issue before filing an eviction. But once the matter gets to court, judges will now have to appoint attorneys for anyone whose income is below 200% of the federal poverty line.

“With multiple federal stimulus bills and our own commitments, there’s been a lot of taxpayer money for rental assistance in recent months,” Kuderer noted. “We’ve largely used that as cash payments to make landlords whole. So it’s important to make sure we’re not underwriting bad debt by having landlords then turn around and kick out a tenant.

“If we’re helping landlords, we also have to help tenants.”

Additional coverage in the Seattle Times