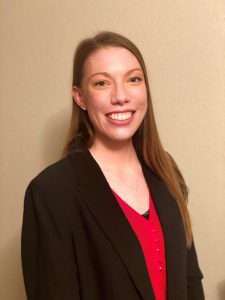 Mitchell Hamline student Victoria Guillemard spent the school year like her fellow 2Ls, with one notable exception. Between attending classes online, studying, and working in a public defender’s office, she also has been part of an effort to educate people about the new whites-only church in her hometown.

Recently, her efforts drew the ire of the church’s priest, who asked for a harassment restraining order against Guillemard. That request was denied.

“I got the text telling me I’d won right before going into court for one of my clients,” Guillemard said, in an interview. “So I entered that hearing on Zoom with a big smile on my face.”

The journey started just after Guillemard finished finals in spring 2020. When Mitchell Hamline announced classes would remain online for the summer and fall semesters, the 24-year old moved back to Murdock, Minnesota, her quiet hometown of fewer than 300 people.

That was around the time the Astru Folk Assembly (AFA) Church sought a permit to operate in a shuttered church it had purchased. Jason Plourde, an ordained AFA priest, acknowledged in court that AFA’s goal was to “promote and secure the future of ‘white children’” and that only those of European ethnic descent – clarified as “white” – are allowed in the church. The Southern Poverty Law Center and American Defamation League both recognize AFA as a White Supremacist organization.

From there, Guillemard set off to learn all she could about the group and the legalities around its efforts.

“It was between semesters and I had some down time, so I spent 48 hours googling everything I could about zoning laws and the constitutional rights of hate groups,” Guillemard said. “I didn’t want Murdock to be the hate capital of the Midwest.”

She asked professors for help; they pointed her to resources but also cautioned Guillemard that both religious freedoms and other First Amendment expressions complicated matters. “I knew pretty quickly this was a sticky legal situation.” 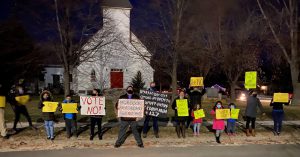 Members of Murdock Area Alliance Against Hate protest outside the new location for the AFA church in this undated photo.

In the end, she and seven other people created Murdock Area Alliance Against Hate (MAAAH). Their strategy isn’t to win legal battles to expel the church, but rather to educate people in the area about the group’s motives. “If we can make it so they can’t operate and continuously recruit, they’ll just move to another town on their own accord,” she said.

Her efforts garnered her attention in the New York Times.

Earlier this year, Plourde sought a restraining order, arguing Guillemard’s efforts amounted to personal harassment. Judge Stephanie Beckman ‘03 rebuffed that charge, writing “there was no harassment because Respondent [Guillemard] is engaged in education and outreach directed at the actions and speech of Petitioner [Plourde] and his group and not focused on him as a person as the focal point.”

Beckman also noted criticism of the church qualifies as a “matter of public concern,” a marker used in determining whether someone is committing harassment.

“It’s important to have a ruling that says, yes, a member of a hate group recruiting in your community is a matter of concern,” added Guillemard. Her attorney for this case was a Mitchell Hamline alum, Brian Wojtalewicz ’76.

“I’ve had people tell me I should be careful because this might affect my legal career, especially the character and fitness parts of entering the bar,” she said. “But this is my legal career.

“I’m becoming an attorney because I want to advocate for those who are silenced. And If I didn’t stand up for my own beliefs, as well, I wouldn’t be able to do that work.”

Previous Post:
Mitchell Hamline alum sponsored historic evictions law in state of Washington
Next Post:
Starting Aug. 1, Mitchell Hamline faculty, staff, and students must be vaccinated to be on campus