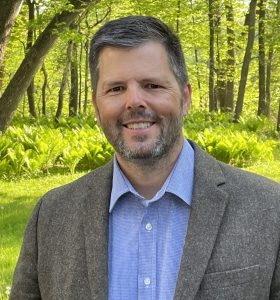 President and Dean Anthony Niedwiecki has announced the appointment of Michael Birchard to be Mitchell Hamline’s inaugural vice president for diversity, equity, and inclusion.

“Michael was universally praised by those who interviewed him over the past few weeks,” noted Niedwiecki, in an email to faculty and staff. “He is one of the top DEI leaders in the Twin Cities and an innovative senior leader at his current institutions.”

Birchard will be part of Niedwiecki’s executive leadership team and will engage with students, faculty, staff, alumni, and the broader community to lead the campus in developing a vision and strategy for advancing diversity, equity, and inclusion. The goal will also be to position Mitchell Hamline as a leader around these issues.

“I am excited to join the Mitchell Hamline community as we strive to incorporate equity and inclusion as a part of our standard decision-making processes,” said Birchard, who comes to Mitchell Hamline from more than 20 years at Minnesota State, a network of public community colleges and universities across the state. For the past two years, he’s been associate vice president for equity and inclusion at Dakota County Technical College and Inver Hills Community College. The schools are in Rosemount and Inver Grove Heights, Minn., respectively.

Raised in Willmar, Minnesota, Birchard has two degrees from Saint Cloud State University. During his time as an instructor and administrator, Birchard has served as adviser to several student affinity groups; he also helped found several organizations. He also developed many courses, including one at North Hennepin Community College called the Dave Larsen American Indian Immersion Experience. Named for a mentor and friend of Birchard’s, the course – like each class he has designed – was specifically centered around social justice, equity, and antiracism.

During his time at Inver Hills and Dakota County Tech, his work included starting an American Indian advisory council and the creating of a racial equity policy, one of many equity-minded policies. After the murder of George Floyd, he also worked with Inver Hills’ law enforcement program to include focused instruction on antiracism and community service work.

The new position was created at the behest of Dean Niedwiecki when he assumed his role at Mitchell Hamline in 2020. Birchard will start June 1.

Previous Post:
Starting Aug. 1, Mitchell Hamline faculty, staff, and students must be vaccinated to be on campus
Next Post:
Three 2021 graduates receive Student Award of Merit