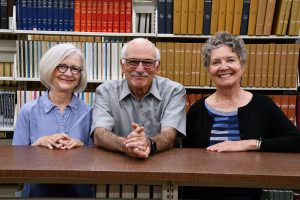 Eric Janus, Ann Juergens, and Nancy Ver Steegh have worked at Mitchell Hamline and its predecessor schools for more than 90 years combined. With their retirements this week, their legacies include not just being experts in their fields of study but also having been part of bringing two major changes to fruition: The very combination that created Mitchell Hamline, along with a new, first-in-the-nation way of offering legal education through online learning.

The trio’s paths crossed multiple times during their tenures: Janus and Juergens both started at William Mitchell in 1984, both rooted in clinical education that offers students chances to do real-world legal work. Janus was clinical director at that time; Juergens became clinic co-director in 1989. Both worked to integrate skills and clinic work throughout the school’s entire curriculum.

Then later, when Janus was serving as Mitchell’s president and dean, Ver Steegh served five years as vice dean (the title later became associate dean) in the years leading up to the combination with Hamline Law and the introduction of the Hybrid (now blended learning) program. 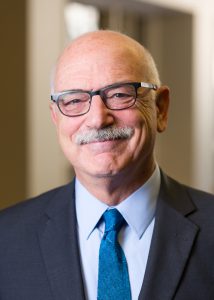 When Eric Janus became president and dean of the law school in 2007, that school was William Mitchell College of Law. When he stepped down, it was set to become the newly constituted Mitchell Hamline School of Law.

Overseeing that combination with Hamline University School of Law – a move that had percolated for a decade in a time of declining law school enrollment nationwide – ranks as one of Janus’ most proud accomplishments. The other was starting the nation’s first on-campus/online program at an ABA-approved law school. The Hybrid program has continued to innovate and is now known as the blended-learning enrollment option.

“Online helped us survive that downturn,” Janus said. “But it also brought the school back to its roots.”

The legacy of Mitchell’s predecessor schools was as a night school for part-time students, but there had been persistent drops in night enrollment – from about half of all students to just a fifth. “The fact that we were a night school was important to the soul of the school,” Janus said. “To have it decline so much was a disappointment. But with Hybrid, we were speaking to that history. We said ‘let’s reimagine night law school for the 21st Century.’”

“Every law school had to figure out online learning during COVID, but even six years ago, there was so much hesitancy in legal education to be online. That made this even more of an accomplishment.”

As president and dean, Janus also oversaw a $25 million campaign to raise funds for endowed chairs and scholarships, which helped support the work of the school’s faculty. “The strength of this school has been the way it’s combined the need for academic scholarship with the need for clinical education that puts students into real-world legal situations,” he said. “I love that we’re a place where the idea of justice isn’t just a theory. It’s something you do.”

Janus is a Peace Corps alum, amateur photographer, and former math major whose focus on mental health law, especially around civil commitment, came about in part because of his pre-law-school work at Legal Aid. There, he became the go-to attorney for matters related to people being psychiatrically committed. He helped rewrite Minnesota’s laws around such commitments in the early 1980s. When the state moved in the 1990s to civilly commit sex offenders, even after they’d served time for their criminal convictions, Janus was at Mitchell and started working to challenge the constitutionality of those laws. He’s testified before legislative committees and was invited to a series of East Coast gatherings during the Obama administration to discuss how to close the detention facility at Guantanamo Bay – like civil commitment, a form of preventative detention.

He was part of a lawsuit that was litigated for 10 years, challenging Minnesota’s sex offender laws. Later, a federal court judge ruled the state’s program was unconstitutional; working with the ACLU, Janus filed amicus briefs, supporting that challenge in the 8th Circuit and US Supreme Court. The core of the district court’s decision was overturned in the Court of Appeals.

As he departs, Janus hopes the school’s work continues to strengthen what he calls Mitchell Hamline’s soul: A school that casts students and teachers as both critical observers and active participants in the legal system, helping them transform into skilled and ethical legal professionals.

“We’ve trained the judges, public defenders, county attorneys, and plenty of elected officials who have all added to the quality of civic life in Minnesota,” he said. “I hope that continues to be our focus.” 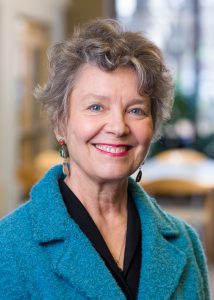 Sitting amidst the books and material still to be carted away as Ann Juergens recently cleaned out her office was an easy-to-miss group photo taped to a file cabinet.

The photo is from 1995, when the school sent Juergens to the United Nations Fourth World Conference on Women. It’s the conference where then-First Lady Hillary Rodham Clinton delivered the now-famous line that “human rights are women’s rights, and women’s rights are human rights.” Juergens was in the room for that speech. “It was thrilling,” she remembered.

Juergens has long championed clinical education and teaching legal skills in law school – and she’s an expert on housing law. All of these are rooted in her work to advance feminist approaches to legal issues. Even outside her scholarship, Juergens often agitated at William Mitchell, then Mitchell Hamline, for pay equity and more benefits for both faculty and staff with families. There were fewer women when she started at Mitchell in 1984. But an early associate dean, C. Paul Jones, had learned at a previous job that he could hire the highest performing people – often women – if he allowed them to work less than full-time. This led him to hire Rosalie Wahl as the first woman professor at Mitchell, a position she left only when she was appointed the first woman to Minnesota’s Supreme Court.

Her own small firm practice and litigation work, including jury trials and an argument before the California Supreme Court, led her to becoming co-director of Mitchell’s clinics in 1989. “I was the right person at the right time with the right skills,” she said.

At the time, clinical education – while a benchmark of Mitchell’s history – wasn’t fully integrated throughout the law school the way Juergens thought it should be. She was among those pushing for more clinicians in tenure-track positions. And she helped better integrate clinics and skills teaching throughout the school. “Skills like interviewing and negotiation started to be taught in earlier classes for students, which meant we didn’t have to use precious time on that when they got to our clinics.

“The students loved it.”

It was still a time when that kind of real-world experience learning had a low reputation in legal education, she recalls. But as more people interacted with Mitchell students, “they couldn’t believe the sophistication of the issues they were dealing with in their clinical work.

“They had thought we were putting students on simple, dog-bite-litigation-type cases. But we were dealing with core needs, even life or death. Anything around housing, for example, can be a life-or-death matter.”

As she departs, Juergens hopes that clinical work remains part of Mitchell Hamline’s DNA. “I know I’ve made a difference in clients and students’ lives,” she added. “I’ve been quite lucky.” 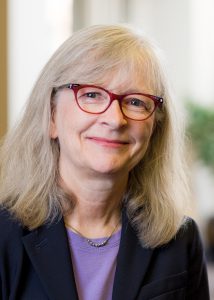 During her 40 year career – 19 of which have been spent at William Mitchell and Mitchell Hamline – Nancy Ver Steegh is amazed by the changes she’s seen in family law where she’s focused her work: domestic violence.

“That’s been gratifying to see.”

As a senior fellow for Mitchell Hamline’s Dispute Resolution Institute, Ver Steegh says she’s always tried to teach students the important role lawyers play in society in preventing and resolving conflict. “I remind them that legal education isn’t just about amassing facts and knowledge – it’s about developing judgement and people skills to know when and how to use that knowledge.”

Her time at Mitchell Hamline also included being part of Janus’ leadership team for five years as vice dean/associate dean. “Those were trying times for the law school,” Ver Steegh recalled. “Applications were going down and the school was struggling financially. But we fortunately used those challenging times to innovate in a way I think has positioned us even better for the future.

“We’d been experimenting with online learning and knew there were people out there who wanted to go to law school but couldn’t move to do so. We found a way to let people attend from just about anywhere.” William Mitchell launched its hybrid learning model, which as since become known as the blended learning option, shortly after Ver Steegh’s time as associate dean. The school then combined with Hamline University School of Law.

“I believe the school will continue to innovate while keeping its core values. We offer flexible but rigorous education, practical experience, and a focus on access to justice.

“And there are plenty of ways to implement those values – it’ll be fun to see where it goes.”

In early June, Mitchell Hamline’s board of trustees granted faculty emerita status to Juergens and Ver Steegh, and president and dean emeritus status to Janus. All three plan to continue work on projects, including research and writing. Janus will continue to direct the Sex Offense Litigation and Policy Resource Center he established at Mitchell Hamline.