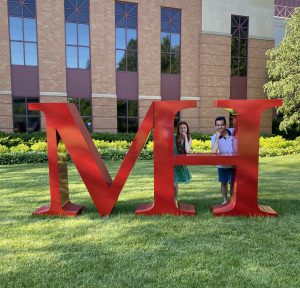 Austyn Boothe and Daniel Sheikhan, in an undated photo on the Mitchell Hamline campus

After prepping for and competing in an international competition for more than a week without much sleep, Mitchell Hamline students Austyn Boothe and Daniel Sheikhan decided to stay up until 4 am a few nights ago to watch the results. It proved a good choice.

The duo won first place last week in the 2021 International Negotiation Competition. This is the second time in Mitchell Hamline’s six-year history that a team of its students won the top prize.

They admit the wee-hours announcement didn’t fully register at first. “We just saw team USA flash across the screen and started cheering,” said Boothe. “Given the sheer talent of the other teams from across the globe, I was genuinely shocked.”

“Austyn and Daniel deserve so much credit for this accomplishment, especially having competed online during a pandemic,” said President and Dean Anthony Niedwiecki. “And we’re thrilled this world championship is back at Mitchell Hamline.”

In 2017, Mitchell Hamline students Brian Kennedy and Briana Al Taqatqa took first at the same competition, which was held in Norway that year.

This year’s competition was hosted remotely by the National University of Singapore and Singapore International Mediation Institute.

“Although the competition was virtual, it was one of the most enjoyable and best learning experiences of law school,” added Sheikhan. “I am extremely grateful for the amazing training and support of our coaches and the dedication and skills that my negotiation partner brought to our team.”

A native of Toronto, Canada, Sheikhan ’21 is one of Mitchell Hamline’s newest alums, graduating this past spring with a certificate from the school’s Dispute Resolution Institute along with his J.D. He works with Reece Law and also holds positions at Donate Northern, The Northern Express Minnesota, and the real estate and investment firm he started in Toronto, Danmar Empire Group.

Boothe, who is in her final months at Mitchell Hamline, is the first person in her family to earn a college degree. She’s also an AmeriCorps alum and has been active in Mitchell Hamline’s Student Bar Association as cohort representative and parliamentarian. She is also a student liaison for the New Lawyers Section of the Hennepin County Bar Association.

“It was a joy to work with Austyn and Daniel this year,” said LeMoine. “They were incredibly motivated to learn and improve their negotiation skills and they consistently received praise for their teamwork, which was a tremendous strength for them.

“Their ability to communicate seamlessly with each other and with their negotiation counterparts was especially helpful in a remote setting.”

The International Negotiation Competition is a competition for law students to engage in the resolution of international disputes or transactions. The Mitchell Hamline team was invited to the international contest after placing second in a national negotiation competition sponsored by the American Bar Association earlier this year.