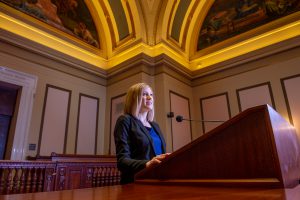 As Brooke Beskau Warg ‘19 sat in court Tuesday morning, she recalled how overwhelmed she had felt during the first week of law school a few years ago.

But thanks to clinical work she did as a student with Mitchell Hamline’s Institute to Transform Child Protection, Warg was sitting in the chambers of the Minnesota Supreme Court, about to argue her first case before the state’s highest court.

“When we learned this case would be going to the state Supreme Court, we knew pretty quickly Brooke would be the best person to make the arguments,” said Natalie Netzel, the institute’s education and advocacy director, who sat in the public gallery during proceedings. “She’s been working on this facet of the law for several years.”

The court – which was also convening for the first time in-person in more than a year because of the COVID pandemic – heard a termination of parental rights case that sought to answer questions over the proper way courts should obtain a child’s testimony and whether the child’s parents or attorneys should be allowed to be present.

Warg had written a brief when she was in law school a few years ago in a case before the Minnesota Court of Appeals that explored similar issues. The state Supreme Court did not take that case back then but was giving the issue a hearing on Tuesday. “This is an important procedural matter for the courts to consider and I was honored to be able to bring these arguments before the justices,” she said.

Hours after the arguments, the court issued a two-sentence decision that affirmed the lower court’s actions. A full opinion with more context will be released later. 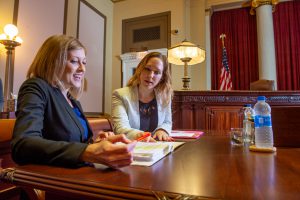 Since graduating from Mitchell Hamline, Warg clerked for the Minnesota Court of Appeals before joining the Institute to Transform Child Protection as a fellow for Equal Justice Works, a nonprofit that works to promote a lifelong commitment to public service and equal justice.

All six attorneys who were listed of counsel in the Court’s proceedings for the case are Mitchell Hamline alums. Joining Warg for the appellants were Netzel ’15; Mallory Stoll ’12 of Blahnik, Prchal, & Stoll; and Michael Schatz ’10 from the Schatz Law Firm. Schatz also spoke before the court. The respondents were Winona County Attorney Karin Sonneman ’89 and Assistant County Attorney Rebecca Church ’11.

“It’s always incredible to see how the work our students do at Mitchell Hamline translates into actual deliberations over important matters,” said Netzel. “Our students leave the school ready to be lawyers because they’ve had actual experience being lawyers when they were here.”