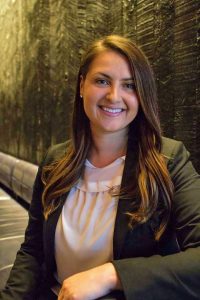 Federal, state, and local governments have provided billions of dollars to help tenants who were unable to keep up with their rent during the pandemic. But even with that assistance, tenants have continued to struggle because there were still gaps and the process was complicated by proceedings held online.

That’s where Helen Paillé ‘12 comes in.

“Housing is just so critical to people’s well-being,” says Paillé, staff attorney at The Waterfront Project, a non-profit in Jersey City, New Jersey that provides pro bono legal services to low- and moderate-income people. “I knew from working with survivors of domestic violence [that] once people lose their housing, the bottom can really quickly fall out on everything else.”

Paillé’s work includes representing tenants in eviction and rent-control cases; it’s a busy time at her office, she adds. While there have been emergency protections in place for tenants, landlords can still seek eviction. And that COVID-related assistance, she adds, while a lot of money, is “a drop in the bucket compared with the need.”

Jersey City, with Manhattan skyline views and easy transportation across the Hudson River to New York City, is a popular home base for commuters. According to Census data, the city’s population grew 5.8% from 2010 to 2019. Paillé says property development is leaving a shortage of affordable housing for long-time residents like low-income senior citizens. “We see all the time landlords who want these long-time tenants to go because they see dollar signs with the way the market in the area is.” Her job, she notes, is to make sure tenants get fair representation in proceedings and know their rights.

Before joining The Waterfront Project in 2019, Paillé worked at the New York Civil Liberties Union. However, her work there focused on policy and she missed having direct client contact, which led her to her current position. “Ultimately, I really wanted to be doing the work.”

Paillé credits Mitchell Hamline with encouraging students to be involved in the community. “It’s not the kind of school where you’re just sitting in the classroom,” she says. She recalls one professor who cancelled a class session during the Occupy Minneapolis movement so students could go to the Hennepin County Government Center and learn firsthand about the issues the protesters were discussing.

“It was a kind of place where I felt we were really encouraged to explore,” Paillé recalls. “We were encouraged to really get out there and do good with our degrees.”

This article was written by Suzi Morales, a writer in the New York City area.

Previous Post:
Alum’s clinic work at Mitchell Hamline paved the way for a Minnesota Supreme Court appearance
Next Post:
Starting Sept. 1, masks are required for everyone on campus