“There are so many reasons I came to this school. Number one, and most important, is because I wanted to be at a school that committed itself to providing access and opportunity to those who otherwise would not have gotten a degree.” 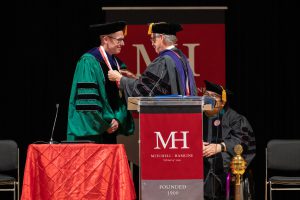 Frank Harris, chair of the Mitchell Hamline Board of Trustees, adjusts a medallion he placed around the neck of President and Dean Anthony Niedwiecki to mark Niedwiecki’s official installation. (photo from Orfield Photography)

But because the law affects everyone, it shouldn’t be developed by a select few who represent one segment of society. It should reflect the diversity of experiences across the country, Niedwiecki said Thursday.

“That is why it is my focus as president and dean of this great law school to build upon and expand this tradition of providing access and opportunity to those who otherwise would not have been able to attend law school, not because they are incapable of succeeding in law school but because of who they are, or because of their wealth or standing in the community, or because of the circumstances in their lives.”

Niedwiecki’s comments were part of an installation ceremony Thursday evening, Sept. 23, 2021, to formally mark the start of his tenure at the helm of Mitchell Hamline School of Law. The event is a tradition for most institutions of higher education to mark the start of a new leader’s tenure and to welcome that person to the school’s community. Niedwiecki became president and dean more than a year ago, on July 1, 2020, but COVID-19 protocols prevented such an event until now.

“There are so many reasons I came to this school,” Niedwiecki noted in outlining his vision for the law and legal education. “Most important is because I wanted to be at a school that committed itself to providing access and opportunity to those who otherwise would not have gotten a degree.

“That is part of its founding, and it has been part of its mission from the very beginning.”

Niedwiecki singled out structures within the law and at law schools that still prevent people from becoming attorneys.

Within the law, he called the bar exam a racist barrier that keeps out many people.

“I would argue that whether the bar exam is a good predictor of a law student’s abilities is not as important of a question as why was the bar created in the first place,” he said. “It was built to keep certain people out of the profession, and it doesn’t test the skills needed to be a successful lawyer.

“There are other ways to license lawyers that are more reliable and equitable.”

Many times, he added, students with the highest LSAT scores get the most financial aid. “This is backwards to me. Law schools need to put as much effort into providing need-based scholarships as they do scholarships based on an LSAT score.”

As part of that effort, Niedwiecki announced the creation of a new scholarship for students with financial needs who want to use their law degree to make positive changes in their communities or want to do public interest work. It will be named for Lena Olive Smith, the first Black woman to be licensed to practice law in Minnesota, who graduated from a predecessor school to Mitchell Hamline 100 years ago. 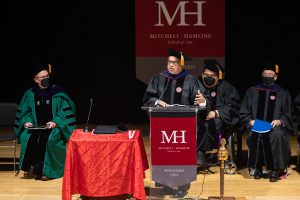 “This law school, led by this leader, is here to help construct a system of law in which people can adjudicate and work out their disputes in an orderly and civilized way,” said Ellison. “In a law school, we study how to use the law on how we respect other people’s rights; observe other people’s dignity; how we respect the point of view of others; and how we come together, hopefully, to resolve a conflict in a way that leaves people whole, or as much as possible. “

“The law is something that affects every person, but not every person feels like they can affect the law,” added Flanagan. “Mitchell Hamline has worked for more than a century to change that – to train the future of the legal profession with a focus on service and to not leave anyone behind.“

A longtime legal educator and activist on behalf of LGBTQ+ rights, Niedwiecki has been a law school associate dean or dean since 2010, most recently at Golden Gate University School of Law in San Francisco. He also held law school faculty and administrative positions at Temple University, Arizona State University, Nova Southeastern University, and the John Marshall Law School in Chicago. Niedwiecki co-founded an organization, Fight OUT Loud, dedicated to helping people counter discrimination and hate directed at the LGBTQ+ community.

Mitchell Hamline is the result of a 2015 combination between William Mitchell College of Law and Hamline University School of Law. Through these and other legacy schools, Mitchell Hamline traces its continuous history to 1900.