A voice for change: Alum seeks to destigmatize criminality 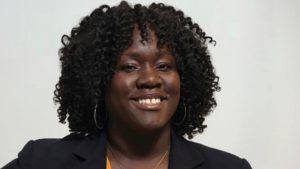 Nadine Graves ’17 understands firsthand the collateral consequences of a criminal past. She had plans to become a nurse and worked as a nursing assistant until she was convicted for felony marijuana possession as a juvenile.

“I was misled to believe that a “friend” was having soccer jerseys shipped to my house and it turned out to be 26 pounds of weed,” she said. “I was 17, naive, and didn’t question why he wanted me to sign for the package under a different name.

“Once I got that record, I couldn’t work in that field [medicine] for at least fifteen years.”

After completing her rehabilitation process out of state to support the expunging of her record, she returned to Minnesota to work in re-entry services, helping others with criminal records get hired. Her career pivoted as she began studying criminal justice and sociology in college, and she decided to go to law school, she said, to “help me best advocate for people that were similarly situated like myself.”

Graves, an attorney with Hennepin County and a former public defender, is an advocate in several ways for fairness in the justice system and destigmatizing criminality.

In January, she was named by Minnesota Attorney General Keith Ellison to serve on the Conviction Review Unit Advisory Board, which advises the attorney general on issues related to wrongful convictions and sentencing and makes policy recommendations. This past spring, she was interviewed by BBC News about the death of Daunte Wright and the trial of Derek Chauvin. And she is in her second term as board chair at We Are All Criminals, which aims to reshape the public’s perception of what it means to be a “criminal.”

She has also started a podcast, “The Waiting Room with Nadine Graves,” where she gives voice to those impacted by the criminal justice system: the formerly incarcerated and their family members, public defenders, foster care workers, and others. Her goal, she says, is to “show how this impacts all of us, so that everybody will feel like they have some stake in seeing things change.”

She wants to lessen the shame associated with being incarcerated or having a family member incarcerated. “I think kids carry that shame, and it manifests itself in so many ways,” Graves said. “The podcast creates a safe space for others to listen and say, ‘Hey, I’m not alone. Let’s normalize having this conversation.’”

Graves, 38, is the daughter of Liberian immigrants and lives in New Hope with her two sons, 8 and 12 years old. In her work at Hennepin County, she represents parents in child protection cases, which allows her to draw on the experiences she had at Mitchell Hamline as a student attorney in the Child Protection Clinic with Professor Joanna Woolman.

“Having that ability to practice under such dynamic leadership – Joanna was phenomenal — helped me be able to build my confidence once I got out of law school and started working as an attorney,” Graves said.

This article was written by Samantha HoangLong, a freelance journalist based in Minneapolis.