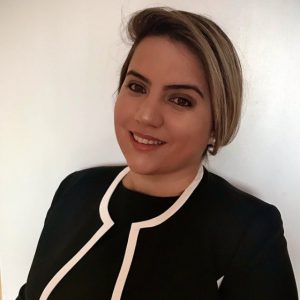 Calafell, a part-time blended learning student, is part of a team of US State Department officials who planned the first-of-its-kind event on Dec 8-10.

“Democracy has been under a global state of threat and decline for the past 15 years,” said Calafell. “The administration entered this event with humility and a focus on learning from allies and partners and finding opportunities for collaboration against the threats that all democracies face.” The online summit focused on three pillars: defending against authoritarianism; fighting corruption; and promoting respect for human rights.

Attendees included heads of state, civil society, young leaders, and the private sector. A Year of Action is now planned with a second, in-person, summit to be held in approximately one year.

For Calafell, supporting planning efforts for the Summit was an honorable opportunity and important next chapter in what has been nearly a decade of public service. the 31-year-old foreign affairs officer has spent most of her career in federal service advancing the State Department’s diplomatic mission in various roles. She currently works in the Bureau of Democracy, Human Rights, and Labor, in the Office of Multilateral and Global Affairs.

She moved from more intelligence-focused positions to policy work in hopes of “making a meaningful impact for people all over the globe.” The summit was also deeply personal as the daughter of Cuban refugees.

The Miami native’s mother, Teresa Calero, was the daughter and niece of anti-communist political prisoners. At age 15, Calero ran into the Peruvian embassy in hopes of reaching liberty during the 1980 Mariel. She was on the first ship that brought Cuban refugees to the United States; one of more than 125,000 Cubans relocated during the exodus. Calafell’s father, Lazaro Collazo, was also an anti-communist political prisoner, jailed for attempting to leave the island and ultimately part of the 1985 Cuba-U.S. prisoner exchange agreement.

“I feel my family’s background gives me a privileged perspective in the area of democracy promotion and human rights, including the need for a rule of law that is grounded in respect for human rights,” said Calafell. “But my time at Mitchell Hamline allowed me the opportunity to learn the intricate details of our legal system.”

It was her mother’s growing expectations that pushed Calafell toward pursuing a JD, though law school was still optional, at first. Calafell’s mother often shared stories of life as a “Gusana” in communist Cuba where she could not pursue education in the same manner as her non-dissident school mates. Calafell recalls her mother telling her how privileged she was to be born as an American and how critical it was for her to study and work hard, “so that you can become a strong, independent, empowered, contributor to this great nation.”

Calero died in 2016, three weeks before Calafell’s son was born. Soon after, Calafell decided to make good on her mother’s expectation and pursue law school. But she didn’t want to give up her career. It was Mitchell Hamline’s partially online blended option that gave Calafell the flexibility she needed. “Mitchell Hamline gave me an opportunity I never thought I’d have,” she had. “I owe a lot to this school.”

Perhaps not a coincidence, given her diplomacy work, Calafell will graduate this winter with a certificate in Conflict Resolution, Theory and Practice, from Mitchell Hamline’s nationally ranked Dispute Resolution Institute. She also was part of the school’s mediation representation team; international law moot court competition; and the Law Journal of Public Policy and Practice, where she currently serves as a policy editor.

“I have been impressed with Lilly’s commitment to learning,” said professor Sharon Press, the institute’s director. “She always was interested in critical feedback and how to improve and consequently, it has been so rewarding to see her growth as a dispute resolution professional.”