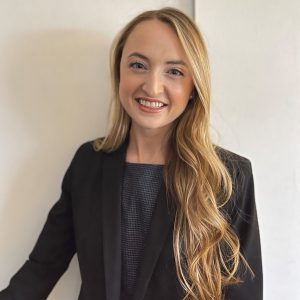 National Jurist magazine has named Mitchell Hamline student Nicole van Lierop one of ten Law Students of the Year. The magazine invites every law school in the country to nominate one student, then chooses its top honorees. “Nicole has done an amazing job being a frontline worker and an excellent law student,” noted Professor Barb Colombo, director of Mitchell Hamline’s Health Law Institute. “I’m thrilled National Jurist has recognized her work with this honor.”

For van Lierop, the thought of law school first came during her final year of nursing school. She had done clinicals in a Veterans Affairs hospital, which gave her an insight into how policies directly affect people’s health. She also interned for a state senator and often worked on health care issues.

Even as she became a nurse, she recalls law school was always part of the plan.

The pandemic, however, was not.

Already a student at Mitchell Hamline School of Law when COVID-19 hit, van Lierop continued both. Her step-down ICU ward at the Minneapolis VA hospital was converted to only caring for veterans with COVID. For a year and a half, van Lierop would provide treatment – and sometimes just company for patients who were alone – by night and attend law school classes online during the day.

“A lot of people have asked how I managed it,” she said. “I really don’t have an answer other than ‘one day at a time.’

“But I also know I fell asleep at least once in each law school class I’ve taken. There were times I thought about walking away.”

Instructors and leaders at Mitchell Hamline worked with van Lierop’s to make her studies more flexible, including letting her attend part-time. 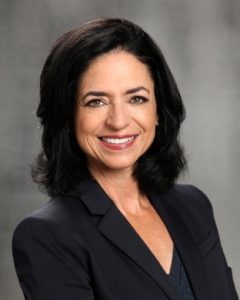 For professor Barb Colombo, it was personal. A registered nurse herself, Colombo saw a student putting the care of others before herself – at a time when there was still no vaccine.

“If you look at who’s really, truly been on the front lines of this pandemic, it’s the nurses,” she said.

Colombo recalls holding office hours on Zoom one evening. In the moment a new window popped up and van Lierop joined the call, she could be seen removing her PPE. She was calling in from the hospital.

“I had to pause, it was so stark,” said Colombo. “But she didn’t skip a beat and had questions about an upcoming presentation. Everybody let her go first because she had to get back to her work. And as I answered her questions, you could see her putting her PPE back on.

“That really made me reflect on the work she was doing, both at the VA and as a law student.”

During van Lierop’s third year, she still found time to participate in moot court competitions; serve as president of Mitchell Hamline’s Health Law Society; and sit on the board of the school’s student-run Law Journal of Public Policy and Practice.

She also planned a wedding and was married last summer – to a law school classmate, Christiaan, whom she credits with helping her navigate the past two years. 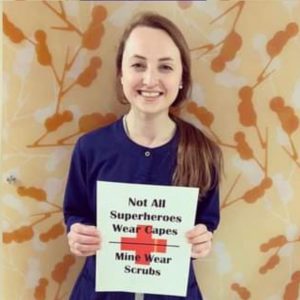 Undated photo of Nicole van Lierop in her nurse’s scrubs, from early in the pandemic.

As graduation approached, van Lierop left her nursing job last fall to focus on her legal career. She’ll graduate in spring 2022 and hopes things get boring: Using her experience as a nurse as a health law attorney and doting on her two dogs and two cats.

“I think the thing that sets nurse attorneys apart is that it’s in your DNA to have empathy,” added Colombo. “You carry that from your nursing career into your law career in representing clients and even developing policies. It’s all about people.”

For van Lierop, her time as a frontline nurse during a pandemic left her not wanting to waste time. “I saw a lot of people die alone,” she said. “All that death and sickness reminded me that life is really short, and I want to do things I want to do and spend time with people I want to spend time with.”

Read more about Nicole van Lierop in the National Jurist’s Law Students of the Year article.