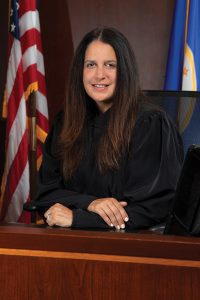 When Judge Richelle Wahi ’03 presides at the Dakota County Courthouse in Hastings, Minnesota, she explains to parties why she doesn’t always make eye contact. “It’s important that people feel seen and heard.”

Wahi experienced hearing loss later in life, so she reads from a court reporter’s real-time transcription on a screen in front of her. Courtroom audio also connects with her hearing aid.

But the pandemic was a time when everyone – not just a select few – needed technology accommodations to attend court.

Wahi and others realized the benefits of having proceedings online, especially without any public transportation connections to the courthouse. “Zoom greatly enhanced access to justice for people in the First Judicial District who didn’t have transportation and saved everyone time and money to get there,” she said.

Wahi, 46, was tasked with getting family court back up and running with a focus on inclusion and access. The importance of such work dates to Wahi’s childhood in rural southern Minnesota and extends throughout her educational and professional journey.

“Being one of only a few immigrant families and growing up in a small town, you’re made keenly aware of your differences,” noted Wahi, whose father was from India and mother from a French-speaking part of Canada. English was rarely spoken at home.

Wahi wasn’t sure what to do after college but was interested in law and accepted to William Mitchell. She didn’t know it was the right choice until she met and was mentored by professor and former Minnesota Supreme Court Justice Esther Tomlijanovich ‘55.

Tomlijanovich started a student group for women, lovingly called ‘the Coven,’ that met regularly for tea and encouragement. “Judge T taught me to never be afraid to ask the tough questions and to continue to go outside the comfort zone,” said Wahi. “And the Coven showed me there’d always be people to support me.”

After law school, Wahi litigated multimillion dollar cases. But it was a conciliation court case worth just $567 – where she volunteered as referee – that pulled her heartstrings. “As small as this case may seem, it was important to this person. It became important to me to serve everyday people.” When a vacancy opened on the bench, Wahi applied and was appointed district court judge in 2016. 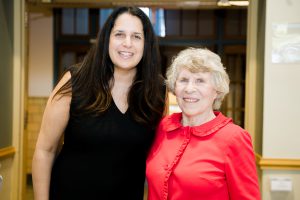 Wahi’s equity work also includes serving on the Minnesota Judicial Branch’s Statewide Committee for Equality and Justice and chairs the Subcommittee on Access and Fairness. The work identifies bias within the justice system and recommends changes in processes, procedures, and policies.

“This work is near and dear to my heart because we know there are inequities within our justice system that must be recognized, challenged, and changed to ensure true justice. It’s my path, it’s my duty.”

EVENT: Judge Wahi presented findings and recommendations of a recent report on jury race data from the Committee for Equality and Justice at an event with the Hennepin County Bar Association in May 2002. You can read the report here.