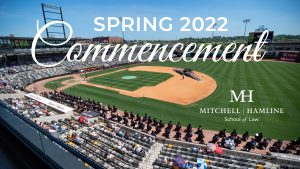 Nearly 350 graduates walked the bases to get their diplomas on Saturday, June 18, at Michell Hamline’s commencement.

The ceremony was the law school’s second commencement to take place at CHS Field in St. Paul, home of the Minnesota Twins’ minor league Saints.

It included those who finished their studies at both the end of last fall and this spring’s semesters.

Deborah Alexander, a New York City resident who served for two years on the Mitchell Hamline Law Review, was the student speaker. Laura Coates, a St. Paul native who is a legal analyst for CNN and also hosts a show on Sirius XM, was commencement speaker.

A video feed of the ceremony was projected on a large screen in the outfield; there was also a livestream for those who were unable to attend, available below.