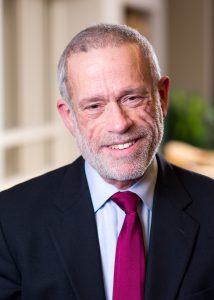 Anthony Winer spent the 1980s working at the Federal Reserve Board in Washington, then two big firms in New York City. By all accounts, he could have stayed in New York and had a lucrative career in international banking law.

But Anthony Winer also spent the latter part of the 1980s watching many of his friends and acquaintances die from AIDS. The distress was compounded by the death of Winer’s own partner of 12 years, in 1989.

“Much of the trauma and death surrounding the AIDS epidemic was built on fear and ignorance about gay people and same-sex sexual attraction,” said Winer. “I finally realized that I could make a positive contribution by leaving the law as I had been practicing it and serving academically as an out gay law professor.

As Winer retires after more than 30 years teaching at Mitchell Hamline, he does so as a trailblazer for LGBTQ+ people in legal education – the first full-time tenure-track and openly gay doctrinal law professor in Minnesota who regularly taught courses in, and wrote academically concerning, issues specifically concerning lesbian and gay people.

“I am so grateful for Tony’s tireless advocacy at a time when it was still risky to be out in our society,” said Mitchell Hamline President and Dean Anthony Niedwiecki, one of a handful of openly LGBTQ+ law school deans in the country. “You can draw a line from his work to my being where I am as an out gay man, but Tony should also be remembered as a phenomenal teacher who helped all of his students gain a better understanding of the law.”

When Winer realized it was time for a career change, he enrolled in an LL.M. program at NYU School of Law specifically designed for students who wanted to become law professors. At a job fair near the end of that program, he told faculty recruiters from law schools across the country he was a gay man who wanted to focus on teaching banking law and the laws around sexual orientation. He recalls getting about ten interviews but only one call back – from William Mitchell College of Law in Minnesota.

He began in the fall of 1991 and his course on sexual orientation and the law soon became wildly popular. He has taught the course ever since. “It was a groundbreaking seminar,” said professor emerita Ann Juergens. “One of the first of its kind and his teaching was always impeccably prepared and rigorous.”

“I went to law school when there was more focus on faculty getting published than actually being a good teacher,” added Winer. “I made it my mission to not be like that. I planned out and structured Socratic questions in a way that proceeded in a logical way, so that students who had done the reading would have an improved understanding.”

In 1991, the Association of American Law Schools (AALS) required its member schools to enact policies that banned discrimination based on sexual orientation. It also required employers that visited campuses to recruit employees also have such nondiscrimination policies in place.

That led to many law schools banning military recruiters because of the “don’t ask, don’t tell” policy at the time that banned openly gay and lesbian people from service. Congress then amended the law to put pressure on schools by threatening federal grants if they denied military recruiters.

Because William Mitchell wasn’t connected to a larger university that relied on such grants for things like research, the school was one of a handful to keep its ban in place – until the feds threatened to take away federal loans for students.

“We were confident we were on the right side of history, but we also knew there could be alums who would’ve disagreed with what we were doing,” said Winer. “Some people saw us as being anti-military, but we weren’t anti-military at all. Just anti-discrimination, and we tried to make that clear.”

The issue came to a head in the local press. “One person who was critical of us, who was also an alum, published a commentary in the [Minneapolis] Star Tribune, saying how disappointed he was in how we were treating the military.”

Winer, Juergens, and 36 colleagues at William Mitchell authored and signed onto this commentary in the Minneapolis Star Tribune on Apr. 29, 2000, defending the school’s picketing of military recruiters on campus.

In response, Winer and Juergens penned a response joined by 36 colleagues. “It was remarkable. Even more conservative faculty members and staff signed on.”

When the military’s “don’t ask, don’t tell” policy ended in 2011, Kent Greenfield – a Boston College law professor who was part of an unsuccessful court challenge by law schools in the 2000s – told the Associated Press that William Mitchell was “worthy of a lot of admiration and thanks from gay and lesbian service members and gay and lesbians around the country for sticking up for gay rights.”

Winer also played a “critical” role in securing marriage equality in Minnesota, according to Lee Anderson ’97, vice president for government and public affairs at General Mills. Anderson was a co-founder of Project 515, which was borne of a project Winer oversaw to document every place in Minnesota’s laws that discriminated against same-sex couples because they only granted rights to opposite-sex married couples.

The volunteers, who included several William Mitchell alums, “met regularly with Professor Winer to review statutes that were more difficult to interpret,” added Anderson.  The result was a list of 515 laws. “For the first time ever, discrimination under the law against same-sex couples in Minnesota had been defined and Project 515 was born.” 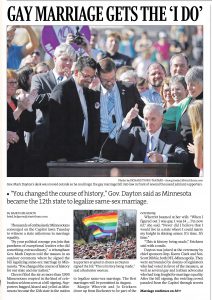 Front page of the Minneapolis Star Tribune on May 15, 2013, after Gov. Mark Dayton signed marriage equality into law.

The organization became one of two to create the campaign that defeated a proposed constitutional amendment in 2012 that would have banned same-sex marriage. The campaign then advocated for the Legislature to enact marriage equality, which it did in 2013. “It all started with that original research overseen by Professor Winer’s keen legal eye,” said Anderson.

In addition to his important work on LGBTQ+ issues, Winer never strayed from his first expertise in business and international law. He coached the International Moot Court team and advocated for international law to be better integrated into Mitchell Hamline’s curriculum, according to Juergens. His work also led to a Fulbright Scholarship that included him making several trips to Azerbaijan, including during the 2008-9 academic year to teach international law.

He also taught professors in the former Soviet republic about teaching methods used in Western law schools. Much of his work was through what is now called the American Bar Association’s Rule of Law Initiative.

For all his advocacy, Juergens also notes Winer “was firmly in the camp of not letting students know the teacher’s own views on political or justice issues. He sought to remain a blank slate and probe the students, so their own views became clear to them.

“In doing that, his students also learned what a supportive teacher he was. He always made time for them.”