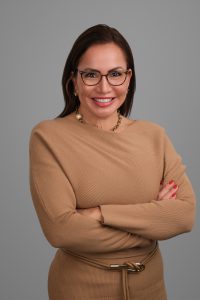 Gloria Contreras Edin ’05 has been a Mitchell Hamline trustee since 2019.

For attorney Gloria Contreras Edin ’05, it’s not enough to practice law. It’s her practice in life to give people hope – something that shines from a dark place where she had little hope of her own.

Contreras Edin’s goal as a child was to survive. Born and raised in an unsafe part of east Los Angeles, she lived in an abusive household. “I felt trapped in an unhealthy environment that instilled fear and insecurity,” she said. She left home at 15 because being homeless, couch hopping, and sleeping in cars were better options than living in that house.

Contreras Edin was always hungry and by age 17, was a pregnant high school dropout. But she caught her first glimpse of hope around Thanksgiving that year. “A random woman gave me a bag of groceries.”

“It was more than just food to me; she gave me a bag full of hope.”

Soon after her son was born, Contreras Edin found an apartment where she could live and work, showing and renting apartments to college students – with a baby on her hip. “I thought, if they could go to college, so could I.” It took a while, but she eventually completed her high school credits and bachelor’s degree.

Contreras Edin met and married her husband during college and moved to rural Minnesota after graduation for his new job. They were surprised to find a lot of Hispanics in the community, and she was content to live a simple life in the country. But that changed when she found work providing English-to-Spanish translation for courts and lawyers.

“I saw firsthand how their fate depended on what was being translated,” she said. “Without proper translation, or any translation at all for that matter, the outcome was grim if not hopeless.

“From that point forward, I wanted to do more for this specific group of people – my people – so they too could understand and experience what justice and the pursuit of happiness truly is.”

Contreras Edin applied for and won a Bush Foundation scholarship, which she used to attend Hamline Law. There, she was inspired by Professor Howard Vogel. “He constantly reminded his students to be true to our ourselves and our values,” she said. “It wasn’t enough to call ourselves lawyers.

“That forced me to go deep within before I went out. And when I did, my vision became crystal clear and things moved quickly.”

After law school, Contreras-Edin was executive director of the non-profit law firm Centro Legal. After three years, she decided to start her own firm at her kitchen counter. Fourteen years later, Contreras & Metelska has served thousands of clients from over 25 countries on a wide range of immigration issues, committed to helping families stay together in the U.S.

Contreras Edin also serves as a Mitchell Hamline trustee; volunteers with the food shelf Neighbors Inc.; and has been a judge for the Metropolitan Economic Development Agency’s Million Dollar Challenge, which awards $1 million every six months to local BIPOC startups.

“It brings me so much joy to see someone’s face light when we hand them a check to start their own business,” she said. “What it represents is an entire community’s high hopes for their success.