The Infinite Mission: Retired judge works to get more women on the bench 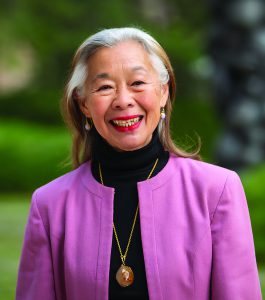 When asked if she’s any less busy in retirement, her chuckle says it all.

Judge Gail Chang Bohr ’91 served last year as president of the Infinity Project, a nonpartisan group dedicated to getting more women into judgeships. “There are plenty of qualified women, but they don’t put themselves forward,” she said. “We don’t endorse candidates, but we aim to demystify the judicial application process and prepare women to put their best foot forward.

“We’re also partnering with organizations like the Black, Native, Hispanic, and Asian Bar Associations to expand our pipeline and increase diversity.”

Chang Bohr’s own diverse background lends itself well toward this mission. “She’s a tremendously thoughtful and influential leader in the legal and judiciary communities,” said Irene Kao ’11, a former Infinity Project president. “She’s had a storied career advocating for children and breaking barriers.”

The ninth child of 15, Chang Bohr was born and raised in Jamaica, where her Chinese parents had immigrated. She came to the U.S. on a full scholarship when she was 18 and earned degrees in social work, followed by a 19-year career. It wasn’t until age 43 that she attended William Mitchell, deciding a law degree would make her a better advocate. After graduating in 1991, Chang Bohr was then executive director of the Children’s Law Center of Minnesota for 13 years.

Then, in 2008, a rarity happened in Minnesota judicial elections: An open seat. Eight candidates ran. “I was unfamiliar with the process but was interested in being a judge,” she recalled. “I knew I was qualified and connected with my community. But I didn’t know, for example, what campaigning involved.

“It turned out being the sort of thing moms, grandmas, and families do naturally. With the help of the largest Asian and Pacific Islander community in the state and other supporters, we worked hard together, learned along the way, and won with 52 percent of the vote.”

That made Chang Bohr the first Asian American judge in Ramsey County. After serving five years, she reached the mandatory judicial retirement age of 70. She still serves as senior judge and continues equity work with several organizations, including the Infinity Project.

The infinity symbol – a number eight turned on its side – represents the organization’s logo and mission to achieve gender equity and increase diversity in states within the 8th Judicial Circuit. Women are half the population but fewer than a third of state judges. Nonwhite people are 40 percent of the population but fewer than 20 percent of state judges. Of the nation’s 12 judicial circuits, the Eighth is the least diverse: Judge Jane Kelly is the only woman currently serving and one of just two women – both white – to ever sit on the court. The other was the late Diana Murphy.

“We have a lot of work yet to do,” added Chang Bohr.