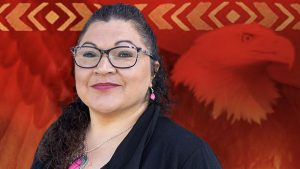 Angela Levasseur, who graduated from Mitchell Hamline earlier this summer, will become the first female chief of her First Nation community in Canada.

In an election held in the Nisichawayasihk Cree Nation over two days last month, Levasseur received nearly 500 votes, besting three other candidates. “Between myself and my opponents, I was very surprised and also overwhelmed,” she told the CBC. “But more importantly, I was deeply honored to be chosen by the people as their leader.”

Levasseur, a former teacher and mother of five, was attending Mitchell Hamline with the idea of becoming her nation’s general counsel. Her graduation in July made her the first person from the Cree nation to graduate with a law degree.

But, she told the CBC, “things took a little bit of a turn when I was asked in January by some elders in the community to run for chief.” She noted she struggled with the decision because she had been focused on practicing law after graduation. It was also her final semester of law school.

She spoke with professors and mentors, who helped her realize she could still use her law degree to help her community. “I can use a lot of the skills that I learned in order to help my people in the capacity of leadership,” she added.

“Angela is a trailblazer as the first person from her Nation to graduate law school and now the first woman to be elected as the chief of the Nisichawayasihk Cree Nation,” said Professor Angelique EagleWoman, director of Mitchell Hamline’s Native American Law and Sovereignty Institute.  “She was one of those law students who contributed as a student leader and added her voice to leave the law school better for future generations.

“I am sure that she will be a wise and innovative leader in her new role.”

Levasseur was also named this summer to the inaugural advisory board of the Native American Law and Sovereignty Institute. She will be sworn into office for her four-year term on September 6. She told the CBC she heard most during the election that people felt their voices weren’t being heard.

“I want to work very hard to make sure that people are listened to.”