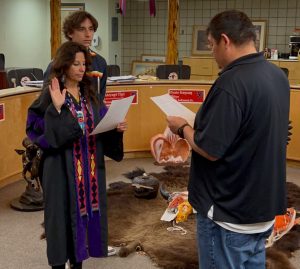 Professor Angelique EagleWoman, being sworn in as Chief Justice of the SWO Supreme Court on Oct. 7, 2022.

Two years after becoming a justice on the Sisseton-Wahpeton Supreme Court of Appeals, Mitchell Hamline Professor Angelique EagleWoman this month was sworn in as the court’s chief justice.

“It is truly an honor to become the first Sisseton-Wahpeton citizen to hold the position of chief justice of the SWO Supreme Court and the first woman,” said EagleWoman, who will serve in addition to her duties as a law professor and director of Mitchell Hamline’s Native American Law and Sovereignty Institute.

EagleWoman (Wambdi A. Was’teWinyan) had served as a tribal judge in other jurisdictions before but noted the unique importance when she was appointed in 2020 to be the first member of her own tribe to sit on the Sisseton-Wahpeton appeals court.

Growing up on the Lake Traverse Reservation in South Dakota, EagleWoman attended the tribal school there, Tiospa Zina, and aspired to be a lawyer. Tribal Nations across the country have long worked to create and bolster their own judicial systems; appellate-level courts are a more recent addition to that work. The court EagleWoman is now leading was created in 2014.

Only decisions appealed directly from the tribal trial court go before the Court of Appeals, which also is referred to as the Supreme Court within the tribal government. Decisions set precedent for how Sisseton-Wahpeton Oyate tribal law is interpreted.

“Appellate courts strengthen tribal legal sovereignty, provide consistency on tribal law interpretation, and demonstrate a commitment to full due process for those involved in cases within the tribal judicial system,” said EagleWoman. “Judges from a particular Tribal Nation will have a greater depth of understanding for the interpretation of tribal law and the ability to explain relevant traditional and customary law when raised by the parties in tribal court proceedings.”

Read Professor EagleWoman’s article on tribal courts, published in Volume 47 (2021) of the Mitchell Hamline Law Review: “Jurisprudence and Recommendations for Tribal Court Authority Due to Imposition of U.S. Limitations”