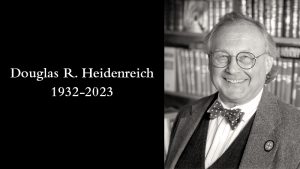 Doug Heidenreich, an instrumental leader and professor at William Mitchell College of Law and Mitchell Hamline School of Law for more than 60 years, died Wednesday at the age of 90.

“There are very few people who have had more of an impact on our law school than Doug did,” said President and Dean Anthony Niedwiecki in an email to faculty and staff announcing Heidenreich’s death. “He leaves a great legacy.”

Just two years after graduating from William Mitchell, Heidenreich joined the law school’s faculty – only to become the school’s acting dean the following year, in 1964. He ended up leading William Mitchell for 11 years during a time of great growth and stepped down as dean just before the school moved to the current Mitchell Hamline campus on Summit Avenue. Heidenreich had worked to make that move a reality for years for a law school that had outgrown its space near the University of St. Thomas campus.

Make a gift in support of the
Professor Douglas Heidenreich Scholarship

“He was the heart and soul of that place for so many years,” said Heidenreich’s best friend, Professor Emerita Phebe Haugen ’72. “I can’t think of Mitchell Hamline without thinking of him.” Haugen and Heidenreich co-taught several courses for many years, including Contracts and a summer course for incoming students.

“It’s going to be a while to figure out how to see a world he isn’t in.”

Born in St. Paul on Feb. 29, 1932 – a Leap Day, which also made him 22 years old at the time of his death – Heidenreich recalled playing hockey on the icy surfaces of poorly plowed streets, using beat up hockey sticks. His chores included taking out ashes produced by the family’s coal-fired furnace. He later worked at a gas station before attending the University of Minnesota, where he played for the Golden Gophers football team. 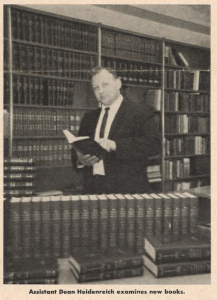 Image of Doug Heidenreich from a 1963 edition of the Opinion, the then-student newspaper of William Mitchell.

It was at the U that Heidenreich became interested in the work lawyers do to help people, according to a Fall 2012 article in Mitchell on Law, which is why he pursued his J.D. After serving two years with the Army tank corps in Germany, he enrolled at William Mitchell and graduated first in his class in 1961. After two years at the Minneapolis firm Erickson, Popham, Haik and Schnobrich, Heidenreich joined the William Mitchell faculty and quickly rose in school leadership. He became acting dean in 1964 and permanent dean the following year.

After marshalling the law school through impressive growth and preparing for a move to a new campus, Heidenreich returned to teaching.

“Doug had little patience for things done in slipshod fashion, and a willingness to speak his mind,” said Professor and former interim Dean Peter Knapp. “Those were qualities that made him a wonderful, though occasionally intimidating, colleague.”

“It is very hard for me to imagine the law school without him, but I suspect I will always hear his voice any time I try to cut a corner.”

Heidenreich often described himself as curmudgeonly, but his many acts of generosity and respect to students and colleagues belied such a reputation.

A notoriously hard grader, Heidenreich’s classroom ethos was rooted in challenging his students to be the best “because he knew their clients would rely on their expertise when they graduated,” according to former Mitchell Hamline Professor Colette Routel, now a Hennepin County judge.

“When he was nearing retirement, he continued to teach without receiving a salary, and then even after he retired, he continued to come to the office to tutor students who needed additional help.”

Routel and Heidenreich had a yearslong routine on Saturdays before the pandemic: Meet for a 2 p.m. “breakfast” at Louisiana Café in St. Paul, where Heidenreich was a regular, then head to a bookstore, followed by a drive through Fort Snelling State Park to photograph deer. 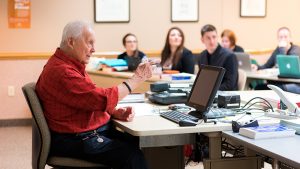 As a student, Professor Barb Colombo ’89 took a Commercial Transactions course from Heidenreich. “His reputation preceded him, and I knew walking into every class I needed to be prepared with cases read and briefed, ready to be called on at any moment,” said Colombo, who is now director of Mitchell Hamline’s Health Law Institute and Health Care Compliance Certification Program. “And while Doug demanded much, he gave even more. He had a compassionate heart with an uncanny ability to know when he needed to check in with his students to be sure they were ‘getting it.’

“It seemed that teaching was a calling for Doug, not just a job.”

In 2000, Heidenreich wrote the first and hitherto definitive history of William Mitchell College of Law, called “With Satisfaction and Honor.” He was a Francophile and acted in a theater group of lawyers and judges that recreated historical trials of legal importance. The group performed at the Landmark Center for several years. His daughter, Lisa ’92, is interim director of Mitchell Hamline’s Burger Library. He is also survived by children Beth and John.

Around the time in the 2010’s when William Mitchell was feting Heidenreich for 50 years of service to the school, he recalled three pieces of advice he had given to a graduating class: “One, be proud of your law school. Be proud of this school; it is a very fine school and does wonderful things for society.

This story will continue to be updated.