“I will be the first tribal member to earn a law degree. And now, some of my students want to attend law school.” 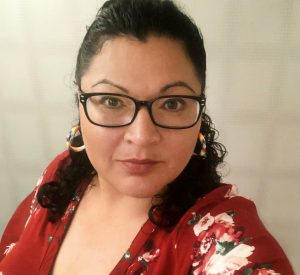 Angela Levasseur is certain people would wonder why she applied to law school at age 41.

The enrolled member of the Nisichawayasihk Cree Nation, who lives on her reservation in northern Manitoba, Canada, has been an educator for the past two decades. But this mother of five, whose children range in age from three to 23-years-old, has wanted to be a lawyer since she was 12.

Though she was drawn as an undergraduate to teach at her tribal school – Nisichawayasihk Neyo Ohtinwak Collegiate – Levasseur never dropped the dream of pursuing a law degree.

When her tribal leaders encouraged its citizens to attend law school, Levasseur knew it was time.

“I had two months to prepare for the LSAT. My son was seven months old so I was nursing him, back at work and [studying] after everyone went to bed.”

After conquering the LSAT, she knew moving away from her reservation wasn’t a viable option. Then she learned about Mitchell Hamline, which has been a leader in helping students who need more flexible enrollment options.

“This is an exciting place to go to law school,” she said. “The Twin Cities has a rich history in Native American activism and Native American law. And Minneapolis-St. Paul has a very engaged Native community.”

Levasseur, who is now 44, is in her third year at Mitchell Hamline. She’s involved with the college’s Native American Law Students Association and serves as its historian, after previously serving as co-vice president and president. She is also the student representative for the Minnesota American Indian Bar Association.

“I will be the first tribal member to earn a law degree,” she said. “And now, some of my students [in Canada] want to attend law school — including my niece, who is considering Mitchell Hamline.”

Upon graduating, Levasseur plans to work for her tribe to move her people closer towards self-determination and self-sufficiency. She plans to find ways to expand economic development and return her community to its methods of justice and develop its own way of doing tribal government.

“It’s important for Native people to run our own affairs,” she said. “A lawyer can go to court and change oppressive and archaic laws.”

While at Mitchell Hamline she’s earned highly transferable skills including writing, oral advocacy and legal research, she said. “In my view, that’s the most important part of being an attorney because they are the skills you need to effectively communicate with people.”

Though she’s living her dream, she adds it’s not fully realized.

“One day, people will say, ‘Isn’t that the place that has all those lawyers and judges’” she said. “That’s what I hope for — that we won’t be an exception or an anomaly.”

This story was written by Toya Stewart Downey, a writer in the Twin Cities.