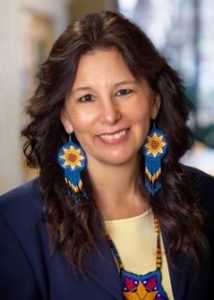 She describes the moment as having come full circle, as a Dakota woman now leading a prominent Native American Law program on traditional Dakota land.

EagleWoman first became a law professor at Hamline University School of Law in 2006, then spent a visiting year teaching Indigenous law at the University of Kansas, before moving west to establish a Native American Law Emphasis program at the University of Idaho College of Law, and serving as the first Indigenous law dean in Canada, at the Bora Laskin Faculty of Law in Thunder Bay. She returned to Mitchell Hamline as a visiting professor in 2018, then a professor of law and co-director of the Native American Law and Sovereignty Institute in 2020. With the departure of co-director Colette Routel to be a Hennepin County judge, EagleWoman now assumes the role as sole director.

EagleWoman has also served as general counsel for her tribe, the Sisseton-Wahpeton Oyate of the Lake Traverse Reservation, and currently serves as a justice on its Supreme Court.

“There is great need for law graduates who know Native American law and an even greater need for Indigenous people to learn the law themselves so they can serve their peoples,” she said. “I look forward to expanding the work of the institute and strengthening tribal sovereignty in legal education.”