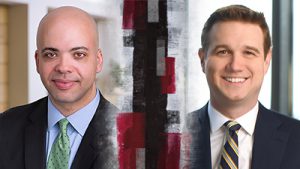 The board, made up of 32 members, oversees the law school.

Stepping down from the board are Judge Denise Reilly ‘83, after 9 years of service; and Richard Mack ‘93 and Charles “Chuck” Johnson ‘75, who have both served for six years. Judge Jill Flaskamp Halbrooks ‘85, who rotated off the board in 2020, has been named trustee emerita.

Sam Clark is civil division director for the Ramsey County Attorney’s office. He served as city attorney for St. Paul from 2015-18, where he oversaw a team of more than 70 legal professionals. He worked previously as a senior aide to U.S. Sen. Amy Klobuchar, serving as her counsel on the Judiciary Committee and also as her state director in Minnesota.

In private practice, Clark has had two stints with Greene Espel, including as partner from 2019-20.

A graduate of Harvard College and Yale Law School, Clark clerked for Judge Michael Davis during his time as chief judge of the U.S. District Court for the District of Minnesota.

Scott Flaherty is a partner at Taft, Stettinius & Hollister, where he handles complex litigation in areas including intellectual property, business disputes, and Indian law.

He has served as an adjunct professor at the University of St. Thomas School of Law and as a clerk at the Minnesota Court of Appeals. He is former chair of the ACLU of Minnesota board and current secretary of the Minnesota Supreme Court Historical Society. He also previously chaired the Minneapolis Commission on Civil Rights.

Flaherty has degrees from Washington University in St. Louis and the University of Iowa College of Law.