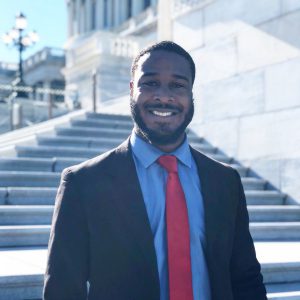 For all his hockey skills, Anthony Walsh didn’t always feel like he belonged on the ice.

“I would hear things that people would say that were extremely offensive,” he said. “As a Black player you’re always taught to skate away, don’t react, don’t retaliate, don’t take a penalty, don’t put your team down.

“That’s right in a sense, but nobody says anything to this other person. And if you do snap, all of the sudden you’re this violent person.”

It’s been almost a decade since Walsh played hockey for Edina High School, where he became one of the few Black players in Minnesota to earn a state championship. Since then, he’s coached youth hockey and played competitively in Canada – always disheartened to see that the sport he loves continues to be a majority white sport – and one where Black players are constantly subjected to racism.

Now Walsh, in between his studies at Mitchell Hamline School of Law, is working to make future Black hockey players feel more included. He’s written a new children’s book titled “Hockey is for Everyone.”

Giving back to the game

Walsh, who transferred to Mitchell Hamline last year, was born in Washington, D.C. and started skating at age 3, eventually playing competitively until age 21. He was later adopted by a white family in Minnesota in the 1990s. After graduating from the University of North Dakota, he spent five months as an intern in Senator Heidi Heitkamp’s office. 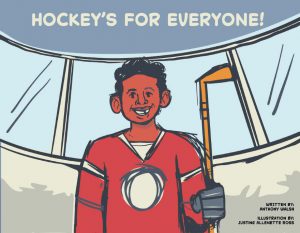 Cover of “Hockey’s For Everyone,” due out this summer

When the pandemic began, he took a moment to slow down and think about life. That, combined with the nationwide racial reckoning prompted by the police murder of George Floyd, compelled him to act, noting he’s always been surrounded by people who didn’t look like him or understand the effects of daily racism.

“Growing up in a white family and then playing hockey, a lot of my network was white people who were well removed from the world George Floyd may have known,” said Walsh. “People didn’t really understand why the Black community was upset, and I’m just sitting here knowing if you’re treated as subhuman for so long and to see something like this happen, you might finally snap.”

He connected that to hockey, which led to the book.

“Hockey is for Everyone” is about making hockey more inclusive, with the goal of spurring conversations not only about the racism on the ice but also the economic barriers that stand in the way of more Black kids playing. The book is being published by Strive, a Black-owned publishing house in Minneapolis.

Walsh sees many parallels between skills needed for hockey and for law school: attention to detail, perseverance, work ethic, and teamwork, to name just a few. He hopes to eventually use book proceeds to help more kids of color access hockey and gain those skills.

“The best way to have done something like that was a children’s book,” he said. “People pay attention to it and they can understand it from an older generation but then you can also really try to cement that change from a younger generation.”

This article was written by Riham Feshir, a freelance writer in the Twin Cities.