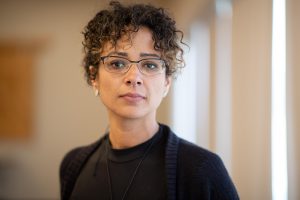 Noelle Faye spends her days helping current and recent prison inmates get free legal aid through Mitchell Hamline’s Legal Assistance to Minnesota Prisoners (LAMP) and Reentry clinics. But recently, her free time has been spent at rehearsals for a new play in Minneapolis that draws on the experiences of people in the state’s prison system.

Faye plays the narrator in “The Labyrinth and the Minotaur: The Incarceration Play Project” from Wonderlust Productions. The production brings together professional actors with former inmates and corrections workers and is built from people’s experiences inside prisons, including inmates, guards, attorneys, and others. The play uses the myth of Theseus – who journeyed to kill Minotaur, a half-man, half-beast inside a maze – as a metaphor for the bureaucracy within the prisons system.

Faye, who previously was incarcerated at the state’s only women’s prison in Shakopee, told MPR news that it was a healing experience to learn about others in the corrections system besides inmates: “It is a beautiful thing to be able to see someone who is a corrections officer shift their thinking and it’s beautiful for me to be humbled by what they have to say because it is real, that’s their experiences. And like we say in prison, your time is your time no matter how many days you have or how you’re spending it.”

This is her third theatrical production; she got her start with two plays she performed while at Shakopee. 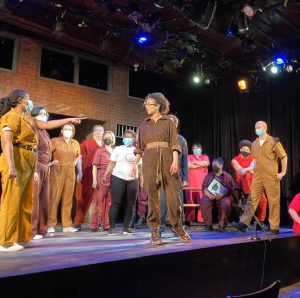 Faye (center), during a rehearsal for “The Labyrinth and the Minotaur”

Faye, 34, was born inside a prison to an incarcerated mother and soon placed into the foster care system in Michigan. After a fatal car crash in 2016, Faye served three years. Upon release, she says she was alarmed by the lack of trauma-informed care for people leaving the prison system. It became her new vocation – to raise awareness about the struggles of the justice system on women of color. That led to the fellowship at Mitchell Hamline.

A Navy veteran and a public speaker, Faye is working with the nonprofit Until We Are All Free to develop a handbook for current inmates. As a fellow for the Brennan Center for Justice, she is writing a book about her own experiences. She’s also involved with the organization Voices of Racial Justice.

She will soon depart Mitchell Hamline when her fellowship is over but plans to continue working in areas that help people who have had interactions with the corrections system. She calls being named Mitchell Hamline’s first formerly incarcerated, BIPOC legal fellow her most cherished accomplishment.

“I bring my lived experience as a single Black mother with a history of housing insecurity to these conversations,” said Faye. “It’s important to bring that experience to places where policies are made and to offer input on what healthy support looks like from the community involved in the care and protection of our most vulnerable citizens.”

“The Labyrinth and the Minotaur” runs from May 13-22 at Mixed Blood Theatre in Minneapolis. Click for ticket information.

In “The Labyrinth and the Minotaur,’ producers lift up voices from Minnesota’s incarceration system (MinnPost)

How a new play centers the stories of Minnesota’s prisoners (Mpls-St. Paul Magazine)