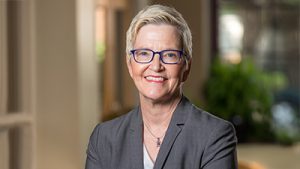 Mitchell Hamline Professor Sharon Sandeen will travel to Switzerland to take part in an historic symposium on trade secret law.

The gathering on May 23 and 24 marks the first time the World Intellectual Property Organization (WIPO) has held a major international conference on trade secret law, according to Sandeen. WIPO was founded in 1970 and became a UN agency in 1974.

“The purpose of the conference will be to educate officials of the organization’s member states and observers about the scope and details of trade secret law,” said Sandeen, who is also director of Mitchell Hamline’s IP Institute. She’ll be a panelist on the 23rd for a conversation titled “Balancing Legitimate Interests in the Trade Secret System.”

“We saw with the pandemic and the conversations over vaccine development how important trade secret law is, especially when it crosses borders,” noted Sandeen. “Countries might have different trade secret systems in place, which creates the need to find balance and places to work together. I look forward to this important gathering.”

Sandeen has focused her scholarship on trade secret law and has written many books, articles, and book chapters on the subject. She’s also presented in several countries and is recognized globally for her work.

Read more about the symposium here.