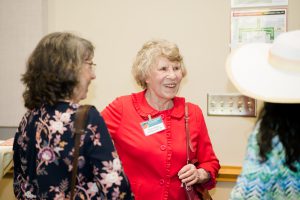 Former Minnesota Supreme Court Justice Esther Tomljanovich ’55, visiting with attendees of the Women in Law celebration at Mitchell Hamline on May 12, 2022.

In 2000, when William Mitchell College of Law was celebrating its 100th anniversary, former Minnesota Supreme Court Justice Esther Tomljanovich ’55 was asked how the school could bring that history into the present. She suggested restarting the tea, an event from her time as a law student and young lawyer when women weren’t allowed in the legal profession and needed a safe space to encourage and celebrate each other.

In its reborn version, the tea – which continued after Mitchell’s combination with Hamline Law – would include fancy hats from a bygone era and be a celebration of women in the law by women in the law.

Last week, when the 20th such event was held (after two years off because of the pandemic), the event was all about Justice Tomljanovich to honor her for both creating the event and for her long career in the law. 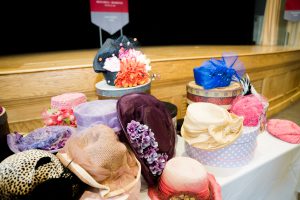 Tomljanovich was the only woman in her class when she started at St. Paul College of Law in 1950, and her law degree “did not open doors to law firms,” noted attorney and emcee Carolyn Chalmers. Instead, she went to work for the Revisor of Statues, an office that works with the Minnesota Legislature to write the state’s laws. 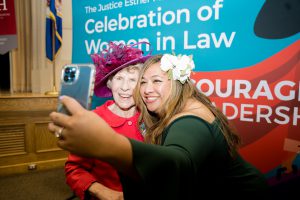 Justice Esther Tomljanovich ’55 snaps a selfie with Ava Marie Cavaco ’17 at the Women in Law celebration on May 12, 2022.

Even when she became a mother and left the working world, Tomljanovich remained active in civic matters, serving on boards and hosting events at her house. In 1974, the legislature appointed her to be Revisor of Statues. She served there until 1977, when – through “courageous persistence,” according to Chalmers – she was appointed a district court judge. She served on that bench – winning reelection in 1978 and 1984 – until 1990, when Gov. Rudy Perpich appointed her to the Minnesota Supreme Court, where she served until her retirement in 1998.

During her career in the law, Tomljanovich continued to mentor women and help them gain representation in the legal profession. Imani Jafaar ‘04, a lead risk consultant for Target, was one of the first Mitchell students to win a scholarship created in Tomljanovich’s name. She recalls the former justice spending several hours with her and two other recipients at an event where the scholarship was awarded.

“I felt an instant connection with you,” Jafaar told Tomljanovich, in a video during last week’s event. “Our friendship has meant everything to me.” 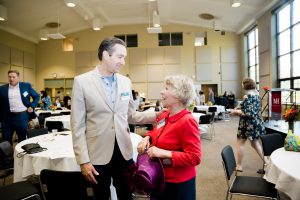 Jim Jacobson, Medica general counsel and Mitchell Hamline trustee, visits with Justice Tomljanovich at the Women in Law celebration on May 12, 2022.

When she retired from the bench, Tomljanovich spent 20 years on the board of the health insurance company Medica. Jim Jacobson, the company’s general counsel and a Mitchell Hamline trustee, noted Tomljanovich never forgot her roots – growing up poor in northern Minnesota – in the work, always asking whether a new policy was good for the company’s members. Tomljanovich also helped create the Medica Foundation, which has awarded millions of dollars to nonprofits that offer services for those in need.

“When I gave legal advice to the board,” Jacobson added, “the first thing they’d do is turn to Esther and say ‘do you agree?’ And I’d hold my breath to wait for an answer.”

To help meet a goal at Mitchell Hamline to raise $50,000 for the Esther Tomljanovich scholarship for women in the law, Medica donated $25,000.

“The question I was asked the most when I went on the court was ‘do women make a difference?’” said Tomljanovich, in her remarks. “I’ve been a mom, trying to manage a sick kid when there was a trial with maybe out-of-town witnesses. And you somehow had to manage.

“Our experiences were different, and it was important to bring those experiences.”