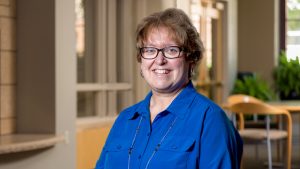 Marie Failinger, a longtime professor who was Hamline University School of Law’s final dean in the months before the 2015 combination with William Mitchell College of Law, has retired after nearly 40 years.

Failinger, 70, said she still plans to be involved with Mitchell Hamline, but she’ll no longer teach full time because of her health. Failinger was diagnosed with ovarian cancer in 2020, and it returned last year after a year in remission.

“I’m in pretty good shape now, but I wasn’t sure I could continue being a professor at the level I expect of myself,” said Failinger. “My future is uncertain, but this is also a good time to let the next generation of leaders take on several new initiatives at the school.”

During her time at Hamline Law and Mitchell Hamline, Failinger taught a range of subjects, from constitutional to criminal to family and property Law. She has also been a leading voice on women in the legal profession, having helped found the Infinity Project – an organization dedicated to getting more women on the bench at the state and federal level within the 8th Judicial Circuit – and being an active member of Minnesota Women Lawyers. 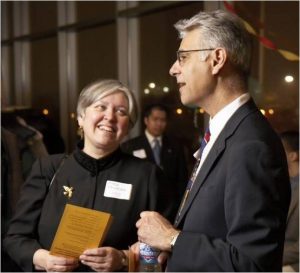 Professor Marie Failinger (left) and Jose Roberto (Beto) Juarez, chair of the Journal of Law and Religion editorial board, during Juris Fiesta in 2008.

“Marie is one in a million,” said Professor Morgan Holcomb, who served as associate dean at Hamline Law when Failinger was interim dean and the school was transitioning to the combination with Mitchell. “She’s the kind of faculty member I strive to be – a scholar whose passion about her subject area comes through in every article and a teacher who respects each student’s intellect as well as their humanity.”

A lot of Failinger’s scholarship focused on the intersection of the law and religion. She served as editor in chief of the Journal of Law and Religion for nearly a quarter century, until 2013. “I was drawn to it because it was a way to think intellectually about my own Lutheran faith tradition,” she noted.

“With her talents for working with all stripes of professors, students, staff, and the public, she quietly undergirded the law and religion conversation in the United States and beyond for decades,” wrote Emily Albrink Hartigan, a retired professor at St. Mary’s University School of Law, in a tribute in the journal last March.

Failinger also has been a steadfast de facto historian for Mitchell Hamline and its predecessor schools, gathering oral histories from several former faculty members and alums and heading a history committee at the school. She also created an oral history project for the AALS Section on Women in Legal Education.

“Marie is a consummate professional,” added Professor Kate Kruse, who also served as an associate dean at Hamline Law just before the combination. “She is always thinking about ways we could be doing things better and who might be excluded by our policies and practices.”

Raised in the Midwest, Failinger attended college and law school in Indiana and initially worked for a legal services organization there before getting a master’s degree at Yale and switching to legal education. She was recruited to Hamline University School of Law in 1983 and was drawn to the idea of helping grow a nascent school that had only been founded a few years prior. 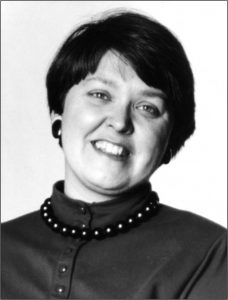 File photo of Professor Marie Failinger when she was at Hamline University School of Law.

“I came to Hamline hoping to educate students more clearly about the challenges that my clients, who were the indigent folks that we served at Legal Services, had getting justice in the courts,” she said. “What I hope I accomplished throughout these years was to get students to open their eyes to the way law both reinforces injustice and serves as a vehicle for justice,” said Failinger. “Especially for the most vulnerable in our society.”

Failinger had two stints as associate dean at Hamline Law before the school needed an interim leader to shepherd the school through its combination with William Mitchell in 2015. Those nine months were spent in intense negotiations with the American Bar Association, which needed to give its acquiescence for the combination. Once the school had moved to the current Mitchell Hamline campus, Failinger recalls vividly being the last one to leave and turning out the lights at Hamline.

“Marie was an incredible source of historical knowledge, insight, and wisdom during that time,” said Professor Mark Gordon, who became president and dean of William Mitchell just before the combination. “She was innovative in her thinking, tireless in her efforts, and candid in her advice.

“I think Marie played an extremely significant role in the success of the combination.”

Failinger was also a mentor for students like Lori Saroya ’13, who recently took office as the first woman of color and Muslim member of the Blaine, Minn., city council. “She was instrumental in helping me navigate law school and realize my potential, even when I ran for city council,” said Saroya.

“It’s amazing to have a professor who believes in you and continues to encourage and support you a decade after you leave their classroom.”