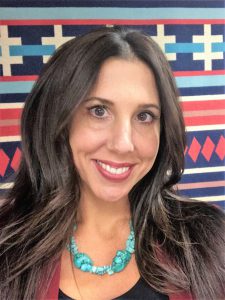 Jessie Stomski Seim, a member of the Muscogee (Creek) Nation of Oklahoma, graduated from William Mitchell College of Law in 2008. Jessie began her legal career at the law firm of Briggs and Morgan, where she represented business clients in a wide array of matters ranging from high-stakes and class-action litigation to employment counseling and commercial transactions. She then took her practice to Hogen Adams, a boutique Indian law firm, where she focused on representing tribes in governance, litigation, and gaming matters.

Jessie currently serves as the General Counsel for the Prairie Island Indian Community, and in that role she oversees all governmental and commercial legal matters for the Tribe. On the government side, Jessie advises the Tribal Council and each of the Tribe’s departments such as the Prairie Island Police Department, Family Services, and Human Resources. She also manages the legal department and all outside law firms who do work for the Tribe, implements and develops tribal law, and is heavily involved in government-to-government dealings on the federal, state, intertribal, and local levels. On the commercial side, Jessie represents the Tribe in matters related to existing businesses, including Treasure Island Resort and Casino, and in economic development initiatives.

Minnesota Super Lawyers magazine has named Jessie a “Rising Star” in the legal industry numerous times. In 2015, the National Center for American Indian Enterprise Development recognized Jessie with its “40 Under 40 Award,” which recognizes emerging American Indian leaders who have made significant contributions to their communities. Jessie is serving her third term on the Board of Directors for the Minnesota American Indian Bar Association.

Before launching her legal career, Jessie was a professional basketball player. She continues to enjoy playing basketball in all-Native tournaments around the country, going to sporting events, and spending time with her family, including her two daughters.