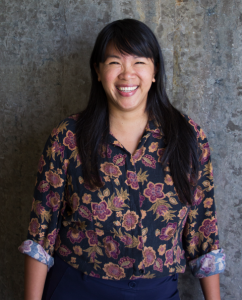 Kim Vu-Dinh will join Mitchell Hamline’s faculty this summer as an associate professor of law, one of several new tenure/tenure-track faculty being hired at the school. She is an assistant professor of clinical education and director of the Business Innovations Clinic at the William H. Bowen School of Law at the University of Arkansas at Little Rock.

“I’m excited for this new adventure,” said Vu-Dinh. “It has felt like I’m joining a team at Mitchell Hamline of like-minded individuals who believe in progress and community-based work.”

Vu-Dinh’s academic work has focused on finding more inclusive ways to foster economic development in underrepresented and underbanked communities. That has included researching innovative ways to reform financial and legal institutions to address the needs of such communities.

“Traditional legal academia often teaches business law through a fairly corporate-centric lens,” she said. “I am really excited to bring a perspective and examples that will hopefully excite students into realizing how they can work in areas of equality in transactional types of law.

“I don’t think I could pull that off at just any law school.”

Vu-Dinh, who grew up in California, earned a bachelor’s degree from the University of California at Berkeley. She attended CUNY School of Law in New York, though she adds she never intended to practice law when she was a law student. Rather, she wanted to use her legal knowledge in her community work with nonprofits and political campaigns.

Over the six years immediately following graduation, Vu-Dinh worked as a law clerk for a state court judge and then as a public defender, before moving to New Orleans. There, she worked in the years after Hurricane Katrina with several nonprofits and small, local businesses developing affordable housing and community-based commercial projects. She started teaching as an adjunct at Tulane University in the Sustainable Real Estate Development Program. That’s when she considered the possibility of teaching full-time.

One epiphany came from a nonprofit colleague who frequently asked her legal questions in areas of the law where she had little knowledge, which made her uncomfortable. “I made some comment about whether he would ask a foot doctor to do heart surgery and his reply was that if he were stuck in the desert and had nothing else, he sure would.

“It helped me understand that it’s so important for lawyers to be in a variety of work. The skills law graduates have identifying risks are necessary in all sorts of community work, especially with people who otherwise wouldn’t have wide access to attorneys. Attorneys know what they don’t know and can figure out if a potential risk can be mitigated. It made me want to think about the importance of having an education that helped me see possibilities.”

After three semesters as an adjunct at Tulane and then a full-time teaching fellowship at Yale Law School, Vu-Dinh said “I knew this was the job for me because I had realized the potential of what a person can share as a professor in the law.

“It’s not all about lectures and grading. There’s so much important work law professors can do in the community to help people and share with students the opportunity to do the same. Mitchell Hamline has these opportunities in abundance.”

At her current position in Arkansas, Vu-Dinh designed the Business Innovations Clinic to foster economic development through small business and nonprofit capacity-building. She’s taught property law and international law & economic development, and has guest-lectured in courses on business law, entertainment law, and public service. She is adjunct faculty at the Clinton School of Public Service, where she teaches social enterprises in the master’s degree program.

Vu-Dinh, 44, says she’s also excited to bring her clinical education experience to Mitchell Hamline, a trailblazer in clinic work. At Bowen, she created an incubator called Innov-Eat Café, where her clinic provides legal assistance and invites food businesses to sell their products on campus.

“I’ve had a lot of opportunities to work on racial inequality in urban areas, especially when I was in New Orleans,” she said. “My time in Arkansas helped me see how similar those inequalities are with those of rural communities.

In addition to her professional work, Vu-Dinh has hosted two podcasts – one about the Vietnamese community in New Orleans; the other about the city’s music scene. Her husband is a jazz musician.

She also was previously an amateur boxer and ice climber – a nod to the need for an “adrenaline-laden outlet to help me keep a cool head when I was doing public interest work that was difficult or frustrating.

“It’s been many years since I’ve had those high-octane hobbies, but I’m looking forward to getting outside in Minnesota and seeing what hobbies await me,” she added. “Probably something gentler on my joints.”