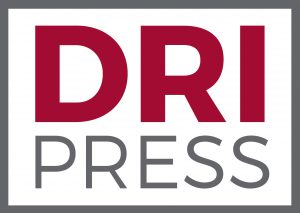 Established in 2009, DRI Press is the scholarship dissemination arm of Mitchell Hamline School of Law’s Dispute Resolution Institute and brings important conflict resolution work to a broad audience. It has published a variety of titles, including a series on Rethinking Negotiation Teaching, a multi-year effort to critique contemporary negotiation pedagogy and create new training designs.

In May 2008, more than 50 of the world’s leading negotiation scholars and trainers gathered in Rome, Italy to embark on a multi-year effort to develop “second generation” global negotiation education. The participants’ post-conference writings – the 22 chapters contained in RETHINKING NEGOTIATION TEACHING -critically examine what is currently taught in executive style negotiation courses and how we teach it, with special emphasis on how best to “translate” teaching methodology to succeed with diverse, global audiences. Collectively, the chapters provide a blueprint for designing courses to take account of the most recent discoveries in the growing, multi-disciplinary science of negotiation and confronting the challenges of teaching negotiation in cross-cultural settings.

Venturing Beyond the Classroom: Volume 2 in the Rethinking Negotiation Teaching Series
by Christopher Honeyman, James Coben, and Giuseppe De Palo
In October 2009, more than 50 of the world’s leading negotiation scholars gathered in Istanbul, Turkey for the second in a series of three international conferences designed to critically examine what is taught in contemporary negotiation courses and how we teach them, with special emphasis on how best to “translate” teaching methodology to succeed with diverse, global audiences. In organizing the Istanbul conference, we took particular note of a consistent strain of criticism of the artificiality of a classroom environment, which became a running theme of many of our authors in the project’s first year, captured in the previously published RETHINKING NEGOTIATION TEACHING: INNOVATIONS FOR CONTEXT AND CULTURE (DRI Press 2009). It would be hard to imagine a better environment for trying something new and different outside the classroom environment than Istanbul, and we tried to do honor to one of the world’s greatest trading cities in our design for the conference. In brief, we dispatched small teams of scholars into the city’s famous bazaars, for one exercise in studying how negotiation might be taught more actively, and dispatched teams into the city’s less touristy neighborhoods on another occasion, with instructions that required each team to negotiate internally. The resulting rich collection of scholarship is gathered in our current title – VENTURING BEYOND THE CLASSROOM.

Assessing Our Students, Assessing Ourselves: Volume 3 in the Rethinking Negotiation Teaching Series
by Noam Ebner, James Coben, and Christopher Honeyman
In 2011 more than 60 of the world’s leading negotiation scholars gathered in Beijing for the Rethinking Negotiation Teaching project’s third and final international conference. The event, like the preceding conferences in Rome and Istanbul, was designed to inspire a diverse and energetic group of scholars to push forward their thinking on what is taught and how it is taught in contemporary negotiation courses.

The resulting productivity required two volumes. This one is devoted to the challenge of assessment. The choice and application of assessment methods can have a tangible effect on student learning, and this is translated here into an operational principle: that intentional use of adroitly chosen assessment methods can lead to more precise, more practical and even “deeper” learning. This volume’s chapters suggest how, in a variety of ways. The collection is presented not as a closed list of evaluation methods, but as a half-filled toolbox. Teachers are invited to consider and try out a mixture of these methods – and to view the creativity they involve as an invitation to create (and share) their own new, and we hope, increasingly sophisticated tools. 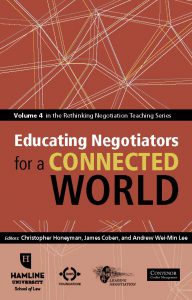 Educating Negotiators for a Connected World: Volume 4 in the Rethinking Negotiation Teaching Series
by Christopher Honeyman, James Coben, and Andrew Wei-Min Lee
In 2011 more than 60 of the world’s leading negotiation scholars gathered in Beijing for the Rethinking Negotiation Teaching project’s third and final international conference. The event, like the preceding conferences in Rome and Istanbul, was designed to inspire a diverse and energetic group of scholars to push forward their thinking on what is taught and how it is taught in contemporary negotiation courses.
The resulting productivity required two volumes. This one wraps up the project as a whole. Multi-disciplinary and multi-national teams address the challenges of teaching negotiation in the face of profound cultural difference; move forward a project special focus on “wicked problems” (those ill-defined, ambiguous challenges for which even defining “the problem” is elusive, let alone attaining a “solution”); design innovative and concrete teaching tools for use both in and outside of the classroom; and introduce an array of new topics for the field, ranging from the possibilities of “informal” education to the role of physical movement in negotiation instruction. 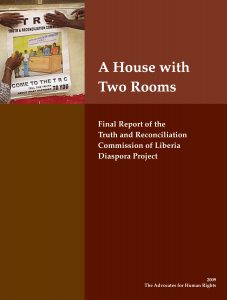 From 1979 to 2003, more than 1.5 million Liberians were forced from their homes to escape from the violence and destruction of a protracted civil conflict. Hundreds of thousands became refugees and many eventually made their way to countries of resettlement including the United States and the United Kingdom. Most of their stories have never been told. This report on the experience of the Liberian diaspora, entitled A House with Two Rooms, is the culmination of three years of work in the United States, the United Kingdom and Buduburam Refugee Settlement in Ghana. The report has been submitted to the Liberian Truth and Reconciliation Commission (TRC), the body charged by the Liberian government with determining the facts of the human rights violations that occurred during the civil war. The Liberian TRC officially completed its mandate June 30, 2009.

For those entirely unfamiliar with decision tree analysis, or litigation risk analysis, the first few chapters provide grounding in its fundamental concepts and logic. They guide the reader through a carefully sequenced set of case examples and offer links to videos that demonstrate how to hand draw and calculate simple decision trees. Risk and Rigor then goes far beyond the basics, discussing how to think about structuring decision trees for complex cases—when simplification distorts reality and when too much complexity makes the tree less comprehensible and less meaningful. Drawing upon the fields of psychology and communication as well as expert elicitation and probability studies, it provides advice for lawyers, mediators, and clients on arriving at thoughtful and robust estimates of probabilities, damages exposure, and other tangible and intangible costs in the litigation context. There are abundant not-so-hypothetical case examples and their decision trees, as well as tips on best practices and mistakes to avoid when structuring a tree and estimating its numbers and percentages.

Recognizing that rigor alone is far from enough, the book explains how to collaboratively build and draw insights from decision trees in ways that work with emotion, psychology, and communication for client counseling, negotiation, and mediation. Offering examples of how to use the language and visual impact of decision trees in dialog with clients and opposing counsel, Risk and Rigor is an invaluable resource for lawyers and mediators seeking to facilitate reasoned settlement valuation while maintaining strong client relationships. Shortly after the book’s publication, readers will be able to find RiskandRigor.com, a website with additional resources related to risk assessment, cost estimation, case valuation, and decision trees for legal practice. 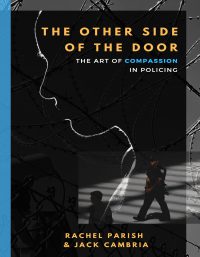 The Other Side of the Door: The Art of Compassion in Policing
By Rachel Parish and Jack Cambria

How is our society doing at maintaining a real partnership between the police and the public? If you’re thinking “not that well”, or worse, this book may be a welcome surprise. The Other Side of the Door is an account of one extraordinary experiment by a remarkable group, jointly headed by theater artist Rachel Parish and by Jack Cambria, the longtime (2001-2015) commander of the New York Police Department’s elite Hostage Negotiation Team. The group also included law enforcement professionals and students, five poets, an emergency medicine physician, conflict management experts, a sociologist and two psychologists.

With this unprecedented combination of viewpoints and talents the group set out to create a new approach to police training for emotional competence. They learned as much from what did not work as from what did. Both the successes and the failures are documented in this groundbreaking book. The results suggest some new possibilities for reconciling our police forces and the people they must serve. 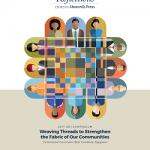 This publication is many years in the making. Most of the pieces were written by participants in the Dispute Resolution Institute;s 2017 Symposium entitled: An Intentional Conversation about Community Engagement: Weaving Threads to Strengthen the Fabric of our Communities.  The Symposium was the second one devoted to public engagement and followed the 2015 biennial symposium entitled: An Intentional Conversation About Public Engagement and Decision Making: Moving from Dysfunction and Polarization to Dialogue and Understanding.  Articles from the 2015 Symposium were published in the Mitchell Hamline Law Review (42 Mitchell Hamline Law Review 5 (2016). 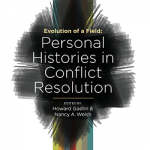